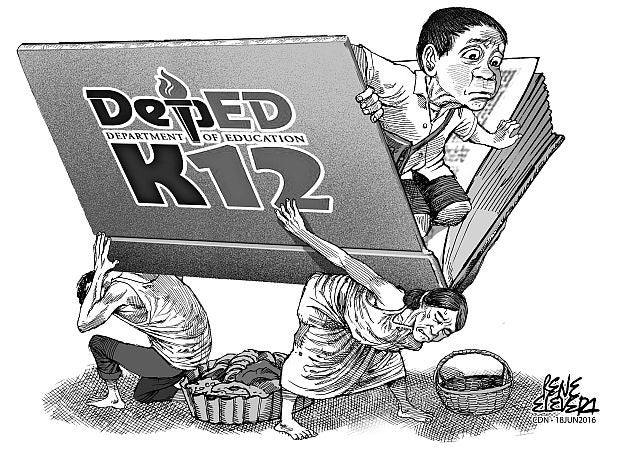 By now most schools in Cebu and the rest of the country would have adjusted to the K-12 program that the outgoing Aquino administration has implemented though we don’t buy the Department of Education’s (DepEd) assessment that they were “92 percent” ready for its implementation at last Monday’s opening of the school season.

Their admission that they still lack classrooms and teachers that are equipped to handle 11th Grade education and its first batch of students belie that claim. Then again, we didn’t expect the adjustment to be easy in the first place.

There may be plenty of blame to pass around for that predicament but we hope the gap between students and the facilities and personnel needed to give them an extra few years of high school education would be narrowed down sooner than expected which may be several years down the road.

Parents may be the first to howl against the K-12 implementation and to demand a return to the previous system of four years of high school. But they would only deny their children the opportunity to acquire the knowledge, skills and training to get the best jobs available for them either in this country or abroad.

It had been said that the Philippines is one of two or three countries in the world that don’t have a senior high school which puts them at a disadvantage to other students in the world who have completed a longer and more comprehensive high school education and who are competing for the same jobs that Filipinos are applying for in their country or other First World countries.

It’s not so much the additional high school years that the parents are opposed to and those loud militant leftist groups are riding on in order to denounce every administration that comes into power in this country, but the additional costs that these extra few years entail.

Again we draw comparisons to First World countries like the US, Japan, Great Britain and other European countries that subsidize the education of their children up to high school level. We do have some measure of subsidizing for our children but this isn’t enough compared to those nations.

It’s only college that the parents in these countries worry about and even then they don’t lack for state support such as student loans which are availed of by American college students who also work other jobs to support their college education.

There is little to argue about when it comes to giving a better education for the country’s youth. Who doesn’t want to one day come prepared and ready to take on the world, armed with a degree and more than average chance of landing that better paying job that is growing more elusive and competitive by the year?

But in rolling out the K-12 program, the Aquino administration failed to set up adequate safety nets for the parents who carry the brunt of the burden in educating their young in order to ensure their shot at better paying jobs and a brighter future.

That’s something the incoming Duterte administration should work and improve on as it takes over the reins of this country on June 30.

Read Next
Our word, our world