Another Sugbo Mercado to open at Cebu Business Park 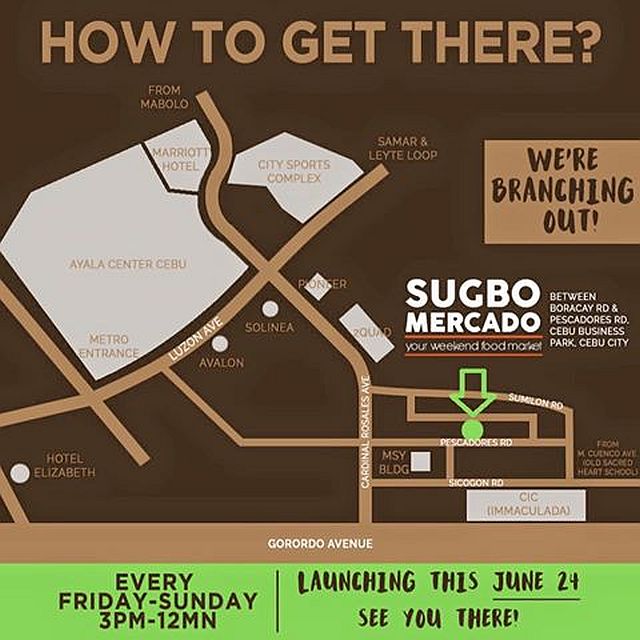 Sugbo Mercado Dos. This is the locational map of the popular food market’s branch in Cebu Business Park, posted on Sugbo Mercado’s Facebook page, that will open on June 24.

EIGHT months after it was introduced at Cebu City’s premier IT hub, weekend food market Sugbo Mercado is set to branch out at the Cebu Business Park.

Karlo Lim, one of the organizers of Sugbo Mercado, said it was high time that they expanded since the food market’s current site at the Garden Bloc in Cebu IT Park in Barangay Apas, Cebu City has become too cramped for its growing number of food vendors and customers.

“We wanted to give a chance for newer vendors, some of whom have been waitlisted in IT Park for two months now,” he told Cebu Daily News.

To be launched on June 24, Sugbo Mercado Weekend Food Market-CBP will operate on Fridays, Saturdays, and Sundays from 3 p.m. to midnight.

Business will continue as usual at its IT Park location on Thursdays, Fridays, and Saturdays from 5 p.m. to 1 a.m., said Lim.

Even before they launched the first Sugbo Mercado in September last year, he said organizers had already been planning to put up one branch in every key location in Cebu City.

From a fluctuating number and variety of 30 to 35 vendors on a 700-square-meter lot in IT park when it started, they have now moved up to 50-booth spaces and over 50 brands on 2,000 square meters of space.

The Sugbo Mercado in IT Park has been a go-to place for a diverse population, but mostly for call center agents and others who work within the area.

Organizers hope to cater to a wider and younger audience with their branch at CBP, considering that it is located behind the Colegio de la Inmaculada Concepcion-Cebu.

Lim said they will target joggers, students and call center agents working in the area.

Sugbo Mercado organizers have entered into lease agreements with Cebu Holdings Inc. for the spaces in IT Park and CBP, said Lim.

The new branch is located on a 1,500-square-meter grassy field along Pescadores Road in CBP where a concrete quad sits next to it, part of which will be the dining area while another will be used for activities.

“We’re looking at doing things that we cannot do at IT Park because it’s gravel. A lot of people would like to do dancing, tai chi, and yoga, which you can’t do there,” he said.

Lim said they have an easement around the area where mats will be placed to allow picnic-style dining, a distinction from the common tables-and-chairs setup in IT Park.

Two big dining tents with tables and chairs will still be available for those who may choose to eat the usual way, he said.

Thirty-five food merchants will be initially accommodated, most of them are new vendors while some are Sugbo Mercado’s flagship stalwarts branching out to the new location.

Among the new ones are brands that offer Halal Tausug cuisine, Taiwanese fried chicken, Korean sliders from a homegrown burger place, and noodle concepts.

Crowd favorites in IT Park such as Kusina ni Nasing, John Lemon, Kuzina Guadalupe, My Greek Taverna, and Papa Churros will now be at Sugbo Mercado in CBP also.

Lim said he is excited how the new players and the already known brands would make more popular the Sugbo Mercado identity with the food market now available at CBP.