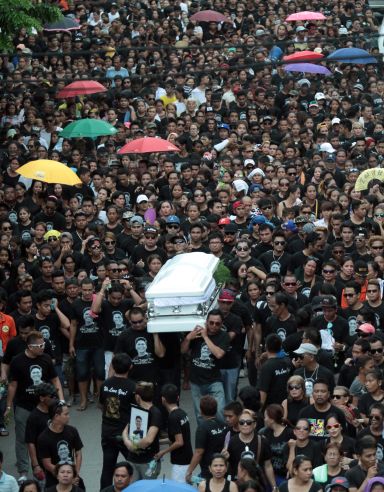 If one did not know any better, the huge crowd of people who joined yesterday’s funeral march on N. Bacalso Avenue in Cebu City was burying a folk hero, not someone whom the police have tagged as the number one drug personality in Central Visayas.

Residents of Barangay Duljo Fatima, led by relatives and friends of slain drug lord Jeffrey “Jaguar” Diaz, yesterday walked nearly an hour along a 1.3-kilometer road that separated the Archdiocesan Shrine of San Nicolas de Tolentino in Barangay San Nicolas, where the Requiem Mass was held, from the Calamba Cemetery, where he was buried at 4 p.m. yesterday.

The mourners, estimated to be at least 2,500, occupied nearly 600 meters of the road and were mostly wearing black T-shirts printed in front with Jaguar’s photograph and the words “Jeffrey ‘Jaguar’ Diaz, We Will Miss You” and “We Love You!” at the back.

Up until yesterday, the public did not know how Jaguar looked like even as his face was a familiar sight among those who live in Barangay Duljo, including those who knew him since he was a 10-year-old boy who served as an altar boy of the San Nicolas church in the 1970s.

The mourners walked in silence as a group of about a dozen grim-faced men carried aloft his white casket, as they marched to funeral and processional songs played by a drum and bugle corps. They were all bare faced, with a few donning dark glasses. All, to the last person, declined to be interviewed.

They also refused media entry into the church while the funeral Mass was going on, saying the family wanted privacy. They barred reporters from approaching the area where Jaguar was being buried, in a granite tomb inside a still unfinished mausoleum.

Police authorities immediately shot down perception that those who joined the burial were sympathizers of, much less hero-worshipped, Jaguar.

Senior Supt. Benjamin Santos Jr., Cebu City police chief, in an interview, said not all people who joined Jaguar’s funeral were there to sympathize with the Diaz family.

“We received reports that those who joined Jaguar’s funeral received between P500 to P800 each. They went there for the money, not to sympathize,” he told Cebu Daily News.

“Of course, life is difficult. It’s not easy to earn money. So people really went there because they were paid,” he added.

“Reports from our operatives is that those who carried the coffin were given 1k while those attending 500-800 php.

Question where did those money come from?” asked Comendador via a Facebook comment after CDN shared a video taken by Alan Domingo of GMA 7 Cebu of the funeral march.

Comendador, in an interview, said they were now on the look out as to who would take over Jaguar’s illegal drug operation.

“Someone will definitely take Jaguar’s place. But we will also get that,” he said.

He said there was a high probability that Jaguar’s replacement would come from within his clan, but he did not think that it would now be a large scale operation as when it was held by Jaguar, who was earlier dubbed as a level one drug trader who could dispose of about five kilos of shabu (methamphetamine hydrochloride) a week, with an estimated street value of P59 million.

Comendador said there would be no let up in their campaign against illegal drugs.

“We have gained the upper hand. Let us not waste the momentum, and instead create a smaller world for them (drug peddlers),” he said.

The funeral procession, meanwhile, caused traffic when it reached V. Rama Avenue in Barangay Calamba when the entire right lane was occupied by his supporters — some of whom were on board motorcycles. Tartanillas, or horse-drawn carriages, adorned with white balloons took part in the march.

Some residents of Barangay Calamba also expressed support to the slain drug personality.

They raised a brown carton with a statement that read: “Condolence to Manoy Jaguar! We love you!”

Susan Chiong, a 41-year old street cleaner from Barangay Calamba, said many people in her community considered Jaguar a hero.

“He was a kind man. He gave us Christmas presents. We received at least 5 kilos of rice from him every time we visited his house,” Chiong told CDN.

Traffic at the city’s southern corridor was obstructed for about an hour, as motorists using N. Bacalso and V. Rama Avenues had to wait for Jaguar’s funeral procession to pass before they were able to move again.

Yap said mourners filled the 600 meters stretch of road from the church to the corner of N. Bacalso Avenue.

Surprised by the huge crowd, traffic enforcers were left with no other choice but to allow the funeral procession to cross N. Bacalso Avenue to V. Rama Avenue.

Motorcycle-riding enforcers were sent to the area to assist those manning the affected intersections. V. Rama Avenue was cleared of obstruction after Jaguar was laid to rest past 4 p.m.

Those who claimed to know Jaguar said they were not surprised that so many came to his funeral.

Victor Yap, who recalled they were then ten years old when they met as altar boys, described Jaguar as a “ quiet but very funny young man.”

Yap said his family left for Surigao del Sur the following year and had lost touch with Jaguar even after he returned to Cebu in the 1980s.

Yap, who was among those inside the San Nicolas Church past noon yesterday for Jaguar’s funeral Mass, said he was surprised when he learned through the news that his old friend was inked to illegal drugs.

Another of Jaguar’s childhood friends said Jaguar, as a 15-year-old, loved to play basketball.

Others inside the church waiting for the arrival of Jaguar’s remains described him as “good man” and a generous person who gave away cash and five kilos of rice to his neighbors every Christmas.

He would also readily hand out cash to neighbors in need, they said.

Jaguar was killed by operatives of the Regional Intelligence Division in Barangay Almanza 1, Las Piñas City, last June 17. Half a kilo of shabu were seized from Jaguar who only a week earlier sent surrender feelers and claimed that he had become a changed man.

Read Next
Seven remaining barangay captains give back vehicles