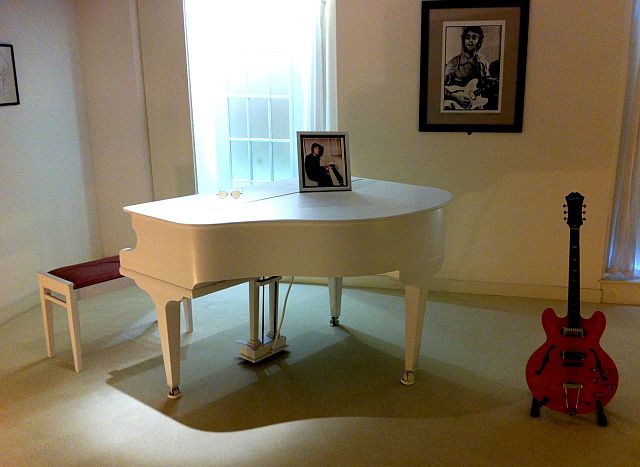 The piano on which John Lennon composed “Imagine” is a nutmeg-colored Steinway upright.

SOMETIMES hearing a city’s name can instantly bring to mind the history, a landmark or a famous product. For instance, San Francisco and the Golden Gate Bridge, Athens and the Acropolis or Venice and the famous canals. One city I was so fortunate to visit, was Liverpool in England, home of one of the most famous rock and roll bands of all time, the

Beatles. Especially that my wife Anna and I own a music school, it was such an opportunity to visit an important city in the history of popular music.
I have to be honest — I did not grow up with the music of the Beatles. They had long broken up by the time I was born. But as I got older and started studying music, I saw their value and how it continues to influence rock and pop music today. It’s hard to imagine what today’s music would sound like if it weren’t for the influence of the Beatles. I’m not sure there has ever been another group of songwriters in one band since.

During our trips, I like to do my research before we arrive, so I can pick out important things to see and do. We usually have limited time, so I try to make the most of it. On this trip to Liverpool I was able to secure a spot on a specific Beatles-themed tour, so I left the planning to the tour guide.

We started our morning by visiting The Beatles Story, the official and licensed museum documenting the band. Visitors can learn the history of the group from their beginnings as the band the Quarry Men and their start while living in Germany. The museum was a good choice so we could learn more about the places we were going to see throughout the day. 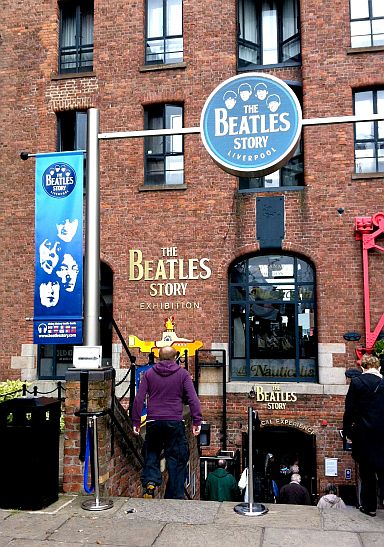 The Beatles Story had a one-of-a-kind memorabilia that really made the story of the Beatles come to life, from the signature round glasses of John Lennon and his white grand piano from the song “Imagine” to Ringo’s drumsticks to signed contracts from the band.

After leaving the museum, we drove around the city to see some of the famous landmarks. We started by visiting the birthplaces of the members of the band. As houses they were nothing out of the ordinary, just average, middle- class homes. Other than the signs showing them as registered historic buildings you would never know their significance. Our guide explained that in Paul McCartney’s teenage home, both he and John Lennon wrote and rehearsed many of their earliest songs. In Lennon’s home, the Beatles’ hit song “She Loves You” was written in the living room. We also saw landmarks such as the register office where John Lennon married the first time as well as the small apartment he shared with his then bride, Cynthia.

There was the Liverpool Cathedral, where Paul McCartney was rejected as a member of the choir as a child. The Cathedral has other significance as it is the largest Anglican church in all of England and has both the highest and heaviest ringing bells in the world. The design of the church actually came about through a competition that the church held and was open to all. A 22-year-old student named Giles Gilbert Scott surprised everyone with his winning submission, beating out the professional architects. It was his first-ever building design. During the rest of his career he designed other large buildings, but he left his mark on England in designing one of their smallest. He designed the signature red telephone booths found throughout London and the rest of the country.

It was exciting to see some of the places that inspired song titles or famous lines from songs. Some were pretty obvious, such as walking down the street Penny Lane, which inspired the classic song. As we passed down the street our guide pointed out the “shelter in the middle of a roundabout” that was referred to in the lyrics of the song. One song inspiration that was a surprise for me was “Strawberry Field.” I guess in my head I envisioned this picturesque field of strawberries in the English countryside–I’m not even sure that strawberries are grown in England. But upon arriving to a gate, we learned that Strawberry Field was an orphanage in Liverpool, located very near the childhood home of John Lennon. It was said their summer garden party was one of his favorite events of the year as a child. 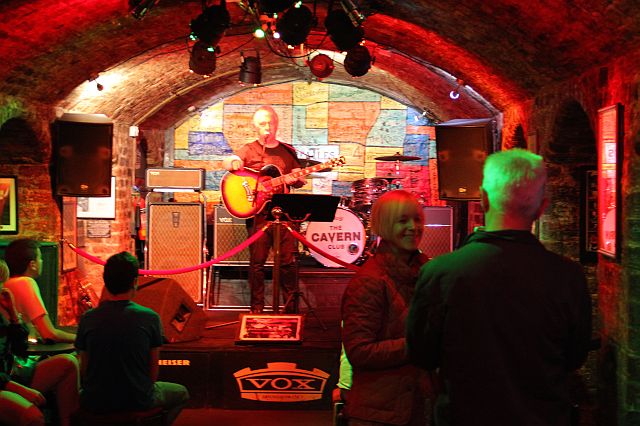 Since all of the Beatles grew up in Liverpool, every corner contained some bit of history related to the band. Sadly I have to admit I cannot even remember every single site as we saw everything from the department store where Paul McCartney worked as a teenager, to some of their first venues performing together, to the Liverpool Institute for Performing Arts (a performing arts school founded through donations of McCartney). I did my best to soak it all up, but even the tour guide had a hard time keeping up with the history of every street and building.

Our tour ended with one of the more significant sites in relation to the history of the Beatles and that was the Cavern Club. This was the center of rock and roll in Liverpool in the 1960s and where the Beatles practically grew up as performers. While the original club was closed from 1973 until 1984, it was re-opened and continues to serve as a live music venue today. The Cavern Club might be most closely associated with the Beatles, there have been numerous famous acts play on the stage during its original days such as the Rolling Stones, Elton John, Queen, and The Who and in more recent days with Adele, Jessie J., The Wanted, and Oasis.

At the end of my tour, I couldn’t help but realize how blessed I was for this opportunity. Growing up on the other side of the Atlantic Ocean I never believed I would have the chance to visit this famous musical city. However I make sure not to take blessings such as this for granted and I promise to pass all of this along to my students at Brown Academy of Music.