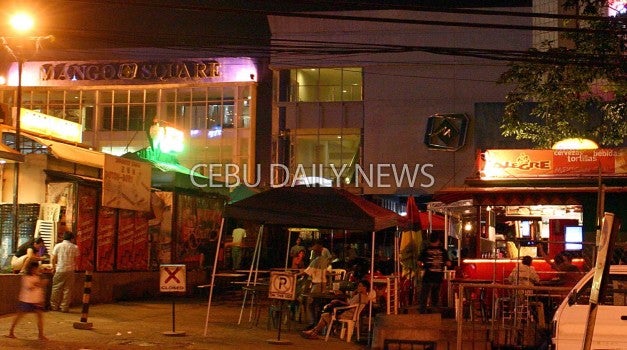 NIGHTLIFE BLUES. Cebu City officials are taking a second look at how the nightlife in the Mango Avenue area continues to draw troublemakers.

Described in a website as a “melting pot” Mango Avenue, particularly the area around Mango Square Mall, packs in the crowd at 7 p.m onwards every Friday and Saturday.

With so many people and so much liquor flowing freely, security guard Leo Condino said the area is a breeding ground for troublemakers.

Thus when Cebu City Hall’s Liquor Licensing Commission warned that more than 20 establishments will be closed down for violating the city’s anti-liquor ordinance, business owners were up in arms objecting to the proposed move.

The fate of these night spots will be known in a meeting at Cebu City Hall tomorrow, Mercado said.

Evidence of Mango Avenue as a magnet for liquor-fueled troublemakers surfaced early this month when Papua New Guinea nationals Timothy Tim Baiyo and a 17-year-old fought with bouncers at the entrance of a bar in the area.

Cebu City Ordinance 1413 bans the operation of establishments selling liquor 100 meters away from a school, church or home.

Mercado said the bars and night clubs operating around St. Theresa’s College (STC) fall within the 100-meter radius from the school.

The commission then asked whether they could relocate if they were given an extension until December. All of them insisted on a compromise since they didn’t believe the city will issue special permits, Mercado said.

As a compromise, the tenants proposed that they be allowed to sell liquor from 10 p.m. until 5 a.m. Liquor will be sold to those 21 years old and above.

Mercado believes that this matter has to be discussed thoroughly before making any drastic decision. “We cannot close it down automatically because a lot of workers will be affected,” the official said.

“If they close us down, the taxes we contribute will go away, too,” the manager said.

The KTV bar she manages employs 50 people or a 10th of the total number of employees working in all establishments in Mango Square.

Rodel dela Peña, who handles maintenance in the same bar, said he and the others are concerned about the city’s closure plans.