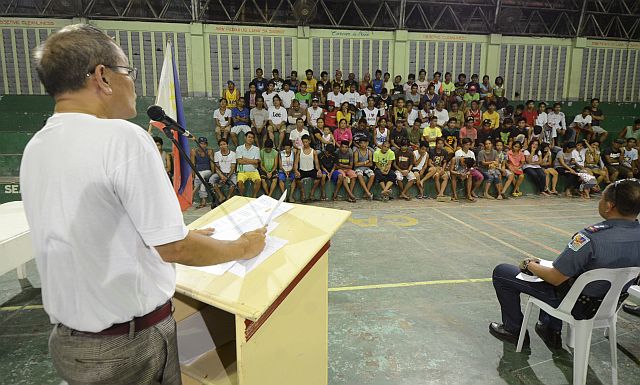 Self-confessed drug users and pushers, including two barangay councilors were presented to Carcar City Mayor Nicepuro Apura Thursday evening. The number of surrenderees has been climbing since the implementation of Oplan Tokhang. (CONTRIBUTED PHOTO/CARCAR CITY LGU)

Police want to include some barangay officials in Oplan Tokhang

Two barangay officials in Carcar City surrendered to police authorities but apparently had no clue as to why they were being asked to surrender.

The police official, in an interview last Thursday evening, said that the two barangay councilors admitted to him that they are drug users.

Their “surrender” comes as police officials in Central Visayas suggested the inclusion of some barangay officials in Operation Tokhang, where police will knock on the doors of suspected drug personalities and urge them to stop their illegal activities.

“To be candid, there are really barangay officials who are into illegal drugs,” said Supt. Rex Derilo, head of the Regional Intelligence Division.

He refused to give further details but said the intelligence reports they got are reliable.

“I can’t tell you now how many barangay officials are involved in drugs,” he said.

Derilo said the spate of illegal drug activities in several barangays is also because barangay officials don’t do anything about it.

“At the end of the day, they blame the police. But I’d like to remind them that fighting illegal drugs is not just the concern of the police. All agencies of government must help each other to be successful in our campaign,” Derilo said.

The two incumbent councilors were among the 363 persons who surrendered to the Carcar City police authorities since the implementation of Oplan Tokhang. Of the number, 56 are alleged pushers while the rest are allegedly drug users.

They were made to sign a pledge that they would end their involvement with illegal drugs.

Carcar City Mayor Nicepuro Apura, in a separate interview said he urged the two barangay officials not to seek reelection in the upcoming barangay and Sangguniang Kabataan (SK) elections in October.

Noted Personalities
In Naga City, three alleged top drug personalities surrendered yesterday to the Naga City Police Office.
Supt. John Clark identified the surrenderees as Jeffrey Alfante, Noel Pinili alias “Baga”, and Eduardo Ravanes Jr. Their names are in the police watch list.
Alfante is number four in the list, while Pinili is number six and Ravanes is in the top nine.
The three of them are from Barangay Tuyan and identified as level three drug pushers who can dispose of 200 grams of shabu per week and net P400,000.
Meanwhile, in Talisay City, 61 more self-confessed drug pushers and drug users surrendered themselves to police and were presented to Mayor Eduardo Gullas where they again pledged and signed an affidavit of voluntary surrender or submission.

Cooperate
Derilo meantime said that aside from just surrendering, drug pushers and users who take part in the Oplan Tokhang must help the police identify other drug personalities.
“They have to disclose something regarding their knowledge on the illegal drug operations,” Derilo said.
Since last July 1, at least 2,656 drug pushers surrendered to the different police stations in Central Visayas.

Talamban
Yesterday, close to 300 self-confessed drug pushers and users showed up at the Talamban Police Station and expressed their willingness to cooperate with the police’s intensified campaign against illegal drugs.
One of them, (name withheld) said he had been selling small packs of shabu to users and earned P1,000 a day.
“I was frightened because it was very clear that there are a lot of drug pushers, who resisted arrest and ended up dead. And it’s everywhere. Besides, one of the reasons why I surrendered is because I am still poor, a situation I have been trying to escape for years,” he said in Cebuano.
He was not a subject of Oplan Tokhang nor was he in the barangay watch list but he decided to surrender.
“The money I get from peddling drugs is not enough for my daily survival. There is nothing good about this kind of life. I sold drugs when I started using it, in order to get money to buy drugs. Some, I use for my personal use, the rest I sell,” he said. /With Morexette Marie Erram, UP Intern)