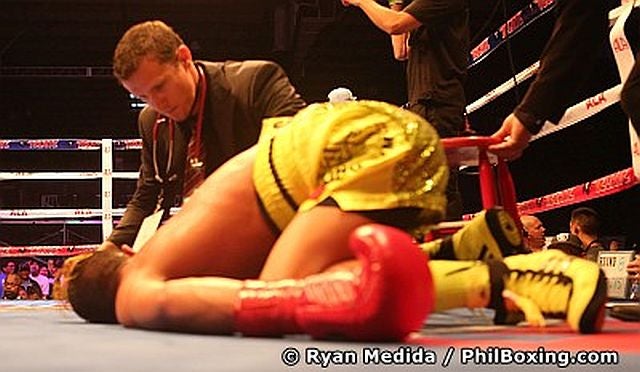 A ring physician checks on Albert Pagara, who was knocked out in the eighth round by Cesar Juarez in the main event of Pinoy Pride 37: Fists of the Future yesterday at the San Mateo Events Center, San Mateo, California.
RYAN MEDIDA/PHILBOXING.COM

Stanford, California – Emerging from the emergency room of the Stanford Medical Center late Saturday night with all his senses intact, “Prince” Albert Pagara who had earlier been brutally knocked out by Cesar Juarez in the 8th round of their main event ecounter of Pinoy Pride 37: Fists of the Future, declared that he will be back.

“Mag-boboksing pa tayo. Naunahan lang tayo. Ganyan talaga ang boksing. Si Pacquiao nga natalo rin. But I will be careful next time (We’re going to continue to box. He got me first. That’s boxing. Even Pacquiao lost),” Pagara assured his worried entourage, including his elder brother Jason, who were nervously waiting for the result of Albert’s CT-Scan which turned out negative.

“What’s important is Albert is okay,” ALA Promotions President Michael Aldeguer said with a big sigh of relief.

Pagara (26-1,18KOs) was carried in a stretcher and brought to the hospital in an ambulance after he failed to stand on his own when Juarez hit him with a 4-punch combination in the opening seconds of the 8th round.

Pagara actually floored Juarez (18-5,14KOs) in the opening round but couldn’t finish him off.

Pagara said he was hit in the brain [left temple] and when he tried to stand up, he could not move his legs the reason why he remained down in the canvas resting on his hands and legs for some time.

According to ALA Promotions International, the attending doctor advised that Pagara could fly back to the Philippines on Monday. 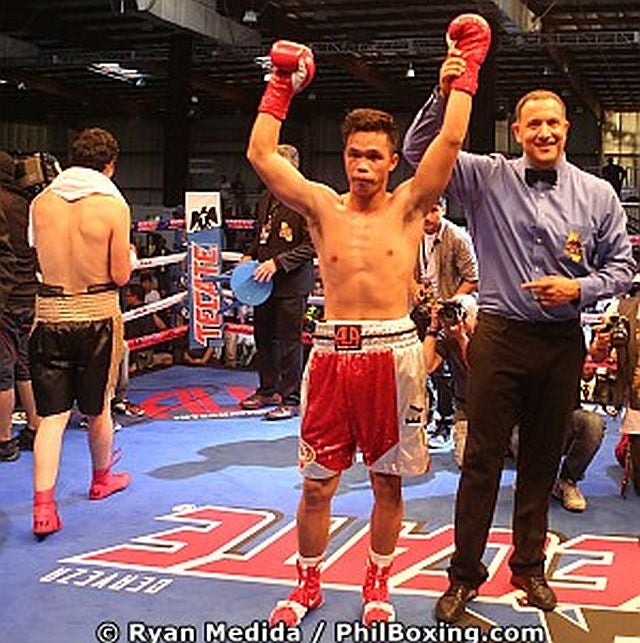 Pagara was also advised not to participate in any contact sports for at least two weeks.

A person familiar with the situation said Albert not able to move his legs was a sure sign of concussion but since the CT-Scan came out negative, it could only be a temporary or shaking concussion. The doctor gave the go signal for Albert to travel back to the Philippines but advised Aldeguer to closely observe Pagara in the next two weeks and have him rest the next six months.

Pagara, who appeared to be exhausted towards the end of the seventh round when he was hit with several heavy punches to the head and body by Juarez, said he was still okay as the 8th round started.

“I was still okay. Juarez does not hit that hard. I can take his punches,” Pagara said. “But what took me out was when he hit my brain. But I’m okay now.”

Pagara, 22, who suffered the first loss of his career, his WBO Inter-Continental belt and his lofty ranking, will travel back to the Philippines on Tuesday in long flight that will surely give him plenty of time to rethink what went wrong in a fight against a bull-strong opponent that he personally requested.

With the win, Pagara remains the number two contender in the lightweight division.

Jason believes his younger brother Albert can learn something from the loss.

“He should not be discouraged, instead he should stand up again and learn from his mistake,” added Jason.

On the other hand, Michael Aldeguer, President/CEO of ALA Promotions, said the fight card was a resounding success.

“It is unfortunate that Albert Pagara suffered his first career loss tonight. But on a positive note, we’re very grateful with the crowd turnout. We had exciting fights from the first bout down to the main event and tickets were sold out. Overall, it was a successful show – achieving ALA Promotions, Abs-cbn Sports, and TFC’s thrust to stage world-class boxing events all over the world. We’re excited to do even a bigger show later this year at a bigger venue in Stubhub Center, LA on September 24th,” said Aldeguer./WITH DONG SECUYA