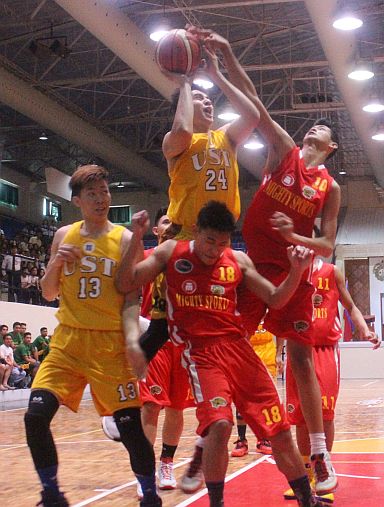 THE University of Santo Tomas (UST) Growling Tigers got off to a hot start in the 1st Recoletos de Cebu Basketball Cup after scoring a 73-60 rout over the hosts University of San Jose-Recoletos (USJ-R) Jaguars in yesterday at the Recoletos Coliseum.

Captain Louie Vigil led all scorers for UST with 13 points while Renzo Subido and Kent Lao scored eight each in one of their preparatory games for the upcoming season of the University Athletics Association of the Philippines (UAAP).

The Jaguars fell prey to the sharper fangs of the Growling Tigers as their only taste of the lead was during the opening minutes of the first quarter, 4-0.

Jaybie Mantilla chalked up 13 markers for the Jaguars and was backed up by Tricky Peromingan and Juan Miguel Gastador, who both added 10 each.

USJ-R’s skipper RJ Dinolan did not see action in the game due to an eye injury he sustained during their exhibition match against the University of Cebu last Friday.

USC was led by Victor Rabat’s 20 points while the Lancers were headed by Michael Maestre’s 15 markers.

UV was composed mostly of its Team B players.

Read Next
One final year with SWU for Tallo