FREEDOM OF INFORMATION AT LAST 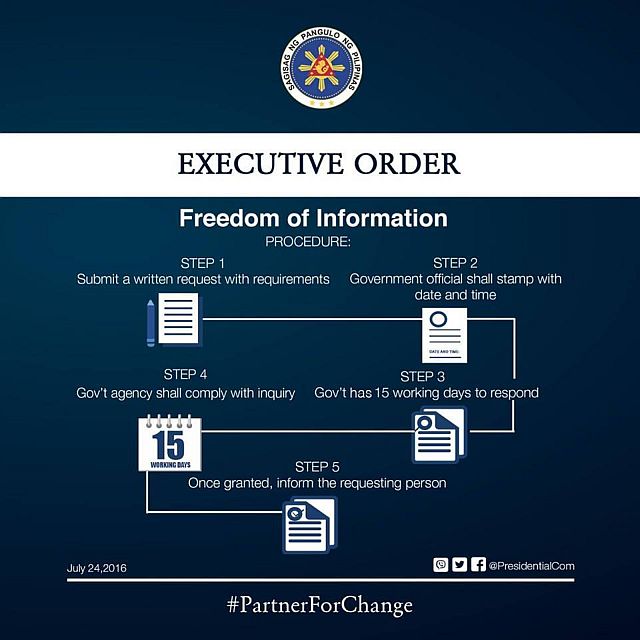 INFORMATION UNLOCKED. This is the infographic released by the Presidential Communications Office detailing the procedure on how to secure documents from any government office under the executive branch.

Henceforth, all government offices under the executive branch – from Malacañang down to the smallest office under it – are required to open up their records, transactions, contracts and all information related to their offices to any Filipino asking for them.

“Every Filipino shall have access to information, official records, public records, and to documents and papers pertaining to official acts, transactions, or decisions, as well as to government research data used as basis for public document,” according to the Executive Order signed by President Rodrigo Duterte on Saturday.

The order implementing freedom of information (FOI) in the executive branch operationizes the people’s right to information and the State’s policies of full public disclosure and transparency in the public service, according to the still unnumbered EO.

The President signed the EO at around 7 p.m. on Saturday at Marco Polo Hotel in Davao City, said Communications Secretary Martin Andanar in a press briefing in Davao City on Sunday.

“Only 25 days as President, this is a record-breaking speed of a cornerstone or milestone executive order being signed,” Andanar said.
Aside from agencies in the executive branch, state universities and colleges and government-owned or controlled corporations are also covered by the order.

Local government units (LGUs) were likewise encouraged to observe and be guided by the EO.

Under Section 15 of the order, any employee or public officer who will fail to comply with the provisions of the EO may face administrative and disciplinary sanctions.

The order defined “information” as “any records, documents, papers, reports, letters, contracts, minutes and transcripts of official meetings, maps, books, photographs, data, research materials, films, sound and video recording, magnetic or other tapes, electronic data, computer stored data, or any other like or similar data or materials recorded, stored or archived in whatever format, whether offline or online, which are made, received or kept or under the control and custody of any government office pursuant to law, executive order, and rules and regulations or in connection with the performance or transaction of official business by any government office.”

But access to information would be denied when the information falls under any of the exceptions provided for in the 1987 Constitution, Andanar said.

The Department of Justice and the Office of the Solicitor General were directed to prepare an inventory of the exceptions and submit it within 30 days to the Office of the President, which, in turn, shall circulate it to the public and to all offices under the executive branch.

Requesting for information in government offices shall be free of charge.

However, the offices may charge a “reasonable” fee to shoulder the actual costs of reproduction and copying of the information being requested, the EO said.

Various groups in Cebu welcomed the signing of the order, with lawyer Aaron Pedrosa, the national secretary for Sanlakas, expressing hope that it would “bring to light” government issuances, contracts, agreements, records, and officials’ acts that have been obscured from public scrutiny.

He said the signing of the EO on FOI should be credited to all those who campaigned and who made FOI a national discourse and an election issue.

He, however, said the optimism has been tempered by the exceptions that DOJ and the Office of the Solicitor General (OSG) have yet to submit.
“Therein may lie the rub,” Pedrosa told Cebu Daily News.

Still, Pedrosa acknowledged that Mr. Duterte has done what former President Benigno Aquino III had failed to do despite having the backing of Congress.

The Cebu Citizens Press Council (CCPC) hoped that mayors and governors would follow the order and for them to “observe and be guided by it.”

CCPC executive director and lawyer Pachico Seares said the signing of FOI EO showed that the President was serious about transparency and access to public information.

“CCPC has asked for specific limits on discretion of local officials to reject requests for public documents. We hope that with the EO, that request will now be addressed by the local officials concerned,” Seares said in a statement released Sunday.

“We must watch out for the limits on the right, in the exceptions to the EO that will be drawn up, the actual guidelines in securing the information, and the final version of the FOI Bill.”

Seares added that CCPC was glad it took less than two months for President Duterte to do “what other presidents just kept paying lip service to.”
The Cebu Federation of Beat Journalists (CFBJ), a federation of 11 media organizations in Cebu, likewise lauded Duterte for issuing the order.
CFBJ president Elias O. Baquero said what was denied by the 16th Congress (2013-2016) when lawmakers refused to pass the FOI Bill has now come into reality.

“Duterte’s executive order will now give every Filipino access to all information on public transactions so they may know what’s happening within the government bureaucracy,” Baquero said in a text message.

Both Seares and prominent Cebuano lawyer Democrito Barcenas said it was now the turn of Congress to pass the FOI bill.

Barcenas noted the FOI EO only binds the executive department and a law must be passed by Congress that will be binding to all three branches of government — executive, legislative and the judiciary.

But unlike Pedrosa, Barcenas agreed there should be exceptions, as the State should not divulge classified information involving national security or diplomatic confidential issues.

Cebu Ports Authority (CPA) general manager Edmund Tan, sought for comment, assured his office would abide with the FOI EO. “There is no problem to that. We are open, everything is open,” Tan said.

Land Transportation Franchising and Regulatory Board Central Visayas (LTFRB-7) Director Ahmed Cuizon also said the signing of the EO on FOI was a welcome move to promote transparency and accountability.

“I don’t mind releasing information useful to the public, that’s why we even encourage and invite people to attend LTFRB hearings,” Cuizon said.