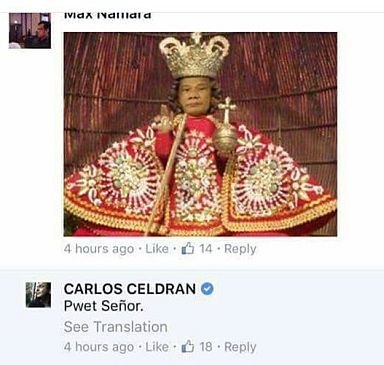 THE Cebu Provincial Board (PB) voiced its distaste on an edited image of the Sr. Sto. Niño whose face was replaced with that of President Rodrigo Duterte. The post went viral on social media last week.

During their regular session Monday afternoon, the PB approved en masse a resolution filed by PB Member Sun Shimura condemning the post made by a certain Max Namara on Facebook.

“The act is very much detestable and a serious affront to the faith of the Cebuanos who are very well-known of their deep and profound devotion to Señor Sto. Niño de Cebu,” read Shimura’s resolution.

The resolution also pointed out a comment made by cultural and anti-Duterte activist Carlos Celdran on the post which read “Pwet Señor,” the chant made by devotees to the Holy Child Jesus. Pwet is a Filipino term for ass or butt.

The PB also asked its secretariat that the resolution be furnished to all 51 local government units of the province for dissemination.

“This should show all people that Cebuanos take offense on attacks on their faith, especially on Sr. Sto. Niño,” Vice Gov. Agnes Magpale said.