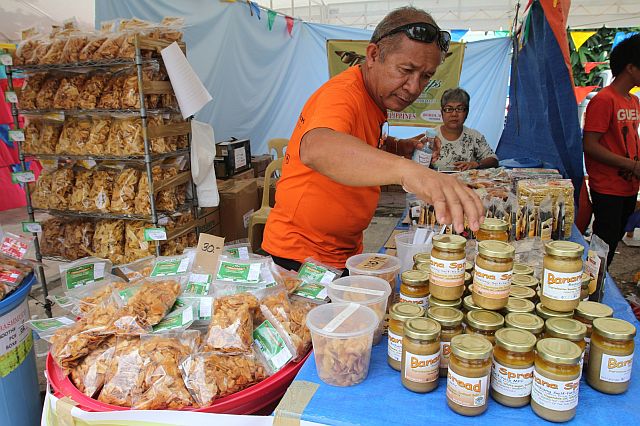 Packed banana chips are usually displayed in agricultural trade fairs. But aside from this product, the delegation from the province of Bohol is introducing a new, unique product — banana spread.

The Badiang Self-Help Multi-Purpose Cooperative of Barangay Bacong in the town of Anda in Bohol brought the product to this year’s Agri-Fishery Trade Fair at the Cebu Provincial Capitol which was opened yesterday as part of the province’s month-long celebration of its 447th Founding Anniversary.

According to Modesto Simacon Jr., president of the Bohol Micro Agri-Processors for Development (Bohol Made), Bohol’s banana spread is the first of its kind in the country and was just developed by the cooperative in the third quarter of 2015.

“They thought of doing this so they can make use of leftovers from their production of banana chips which used to be just fed to pigs,” Simacon said.

The product comes in two varieties — a jar of banana spread with white sugar costs P70 while those with brown sugar cost P65 each. Aside from the ground banana chips and sugar, it is also mixed with vegetable oil and iodized salt.

It is cooked for two hours and then steamed for another 20 minutes before it is packed in a small glass jar.

Leila Bernido, who heads the Agri-Enterprise Development Office of the Office of the Provincial Agriculturist in Bohol, said their banana spread had lesser cholesterol than the more common and popular peanut butter because it had no butter in it.

She also said that it could not also cause allergies since it had no peanuts in it.

Aside from specialty delicacies, the trade fair at the Capitol which is dubbed “Tabo sa Kapitolyo” also showcases assorted produce including seasonal fruits, vegetables, native delicacies, seafood, and other specialty products of the different towns and cities in Cebu province.

The fair will run until the end of this week.

Cebu Gov. Hilario Davide III, who formally opened the trade fair yesterday morning together with Vice. Gov. Agnes Magpale and some Provincial Board (PB) members, said he was happy with the larger turnout of participants this year.

“We are happy that despite the huwaw (dry season), the El Niño, they are still here and are able to sell their produce,” Davide said.

He said that the participating LGUs were trained under the the Capitol’s Farmer-Scientist Training Program (FSTP) where farmers are trained on innovative farming techniques by experts.

Before the opening of the trade fair, Davide also formally declared the province’s monthlong celebration of its 447th founding anniversary at the grounds in front of the main Capitol building.