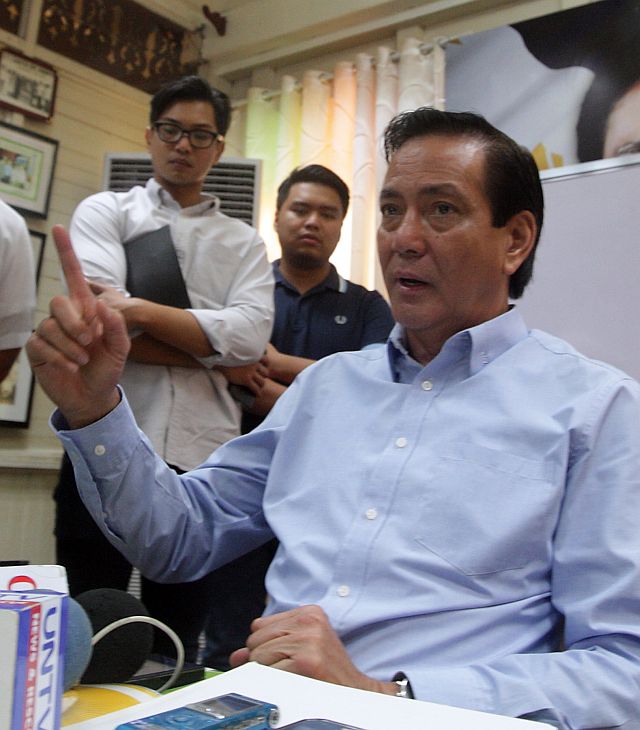 Former mayor Mike Rama talks to media after his audience with the chief of the Philippine Drug Enforcement Agency (PDEA) in Manila. He said PDEA had no evidence to show that he was a drug protector.
CDN PHOTO/TONEE DESPOJO

He also issued the same challenge to Supt. Romeo Santander, whom he said was rumored to be Rama’s “bagman.”

Both Santander and Rama were in the list of alleged protectors of illegal drugs exposed by President Rodrigo Duterte on Sunday.

“I am publicly challenging Mr. Michael Rama to a lie detector test. He said the truth will set him free? Let’s see about that,” said Osmeña wrote in his 11 a.m. Facebook post.

“Nganong kinahanglanon man na (Why is that necessary)?” was Rama’s reply when sought for comment.

But he said if it was necessary, he was prepared to take the test.

Rama called a press conference in his residence in Barangay Basak San Nicolas on Tuesday morning to announce that he visited the Philippine Drug Enforcement Agency (PDEA) head office on Monday morning.

He said someone whom he refused to name advised him to appear at the PDEA office to clear his name and ask for evidence that would link him to Cebu drug operations.

Rama, who refused to identify the person he spoke with at the PDEA office, said they did not have any evidence to show him.

Osmeña said on his FB post that after Cebuano drug lord Jeffrey “Jaguar” Diaz was killed in June, Rama raised accusations that Osmeña had Diaz liquidated “to cover up his dealings with me.”

“After the President himself named Mr. Rama as a drug protector, they repeated the same thing in his defense. Well, who let Jaguar prosper the 6 years he was mayor?” said the Osmeña.

He was referring to the last six years when Rama sat as mayor but failed to stop Diaz’s alleged illegal drug activities.

Rama had previously said that during his stint as mayor, he had no control over the police because of the frequent change of police chiefs by Camp Crame. The police chiefs assigned in Cebu were also not his choices.

“In the interest of transparency, I am willing to sacrifice my civil liberties and will submit to the test at the same time as him. I challenge Supt. Romeo Santander, Mr. Rama’s alleged bagman who I alluded to in my most recent presscon, to submit to the same test as well,” said Osmeña’s FB post.

Osmeña wanted their test broadcast live on the internet and administered by the National Bureau of Investigation (NBI) or any national agency capable of doing so.

“If the President wants to pick the administering agency, that’s fine with me. I have nothing to hide. Do they?”

Osmeña said the lie detector test would answer questions as to who really solicited and accepted money from Diaz or any other drug lords.

“If his (Rama’s) conscience is clear, like mine is, he will not hesitate. The Cebuanos have a right to know. I am returning on August 14 and am willing to take the test as soon as I land. Mr. Rama, you said the truth will set you free. I think it’s quite the opposite. Try and prove me wrong. Game ka na ba?”

Osmeña and members of his family are now in Texas for his annual medical check up. They left Cebu on August 4.

Merlo Louie Gulfan asked Osmeña not to stoop down to Rama’s level.

“Ur the Mayor now and he (Rama) is just an ordinary citizen, although he still beliv he s d Mayor as far as his tarpaulin is concern, just ignore him Sir, no one believes him anyway but on the other hand most beliv his inclusion (on Duterte’s list),” Gulfan said in his comment.

Osmeña replied to Gulfan’s post and wrote: “if I wanted to stoop down to his level, I would hold daily prayer rallies outside Rama Compound. This is not stooping down to his level, this is giving the Cebuanos what they deserve: a clear answer once and for all.”

Read Next
Bohol guv to give names of narco-politicians