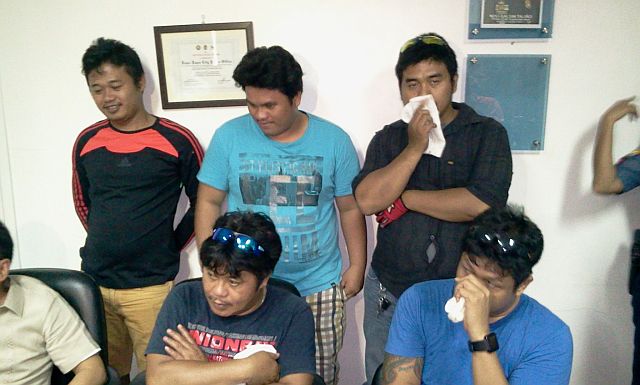 Seated are (from left) Rasul Pabilla and Brix Daligdig, two of the top 10 suspected drug pushers in the Lapu-Lapu City police’s drug watch list along with their men. (CDN Photo/Norman V. Mendoza)

Twelve self-confessed drug pushers, including two men who supposedly supplied drugs to 30 barangays in Lapu-Lapu City, surrendered themselves and their firearms to the Lapu-Lapu City Police Office yesterday morning.

Senior Supt. Rommel Cabagnot, Lapu-Lapu City police chief, presented the suspects to local media along with their firearms at his office.

Leading those who surrendered were Rasul Pabilla and his partner Brix Daligdig who ranked second and third in the police drug watch list respectively.

Both were residents of Camella Homes in Barangay Pajac, Lapu-Lapu City.

Rasul and Brix had no pending arrest warrants but surrendered anyway for fear of being shot down by vigilantes.

The two men denied any involvement in the deaths of suspected pushers that failed to remit their proceeds.

They said all the 30 barangays in Lapu-Lapu city are their market area.

Cabagnot said his office will continue to monitor Pabilla’s group.

“We will study what help we can offer to Pabilla’s group in exchange for their cooperation to topple illegal drug activities in Lapu-Lapu City,” he told reporters.