The Women have it in IronGirls race 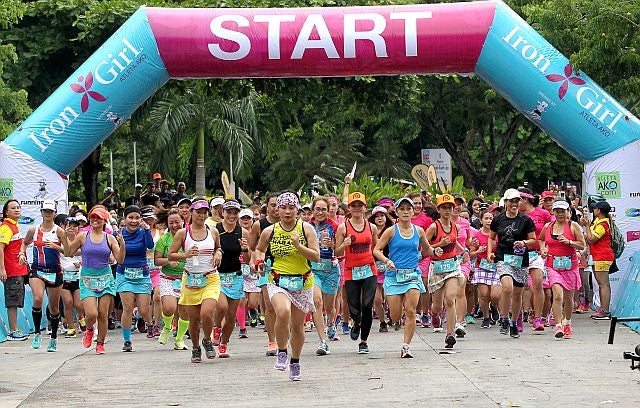 SKIRTS and sneakers was the order of the (race) day.

Motivated by the reward of a finisher’s medal and shirt and a red velvet cupcake treat at the finish line, a field of more than 500 women runners made a dash to the finish line of IronGirls, a side event in last Sunday’s Cobra IronMan Asia-Pacific Championship at the luxury five-star Shangri-La’s Mactan Resort and Spa, Cebu in Lapu-Lapu City.

For the first time, the women— who for the past years were part of the IronMan girl squad—experienced what it’s like to be on the other side of the fence. Last Friday, they took their turn in the spotlight while the men cheered them on.

Sunrise Events Inc. (SEI) General Manager Princess Galura said that the event is another franchise to get the women involved in sports, apart from their cheerleader roles, of course.

“It is a good way to make sure that the daughters, wives, aunties and sisters also have something of their own. These women are always
supporting their IronMan, but this time, the hour is theirs,” said Princess. Expectedly, husbands, boyfriends, sons and nephews waited at the finish line and snapped photos as the women completed the five-kilometer course.

According to Princess, IronGirls could eventually be a female triathlon much like IronKids. For now, on its first year, they are introducing it without the competition aspect of a race.

“We just want to make the women feel special, to have their own race bibs, kits and bags in t heir own event,” she said.

Some of the female supporters who went for the run were Georgia and Glenna from the Guidicelli family, who were there to support actor and triathlete Matteo Guidicelli.