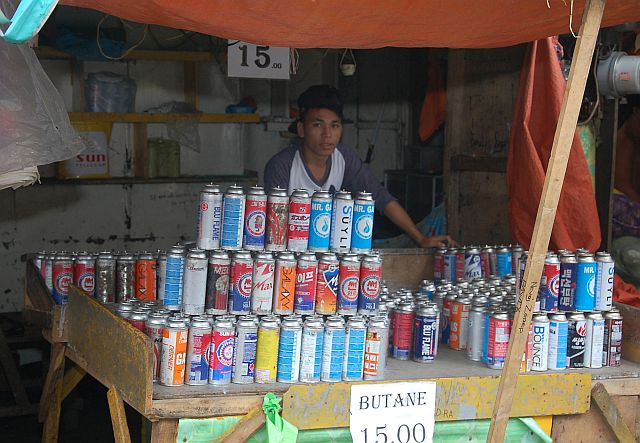 Mayor Paz Radaza seeks the enforcement of an existing ordinance banning the sale, use and transport of refilled butane canisters, whixh are openly sold in markets and sari-sari stores. (CDN FILE PHOTO)

Lapu-Lapu Mayor Paz Radaza is seeking the immediate implementation of an existing ordinance prohibiting the refilling of butane canisters and its sale, use and transport after finding out that it caused the rapid spread of the fire which hit Sitio Arco, Barangay Pusok.

Although the refilled canisters were not the immediate cause of the fire last Monday, they exploded in the heat, feeding further the raging flames that ate up at least 130 houses.

The ordinance banning the sale, use and transport of refilled butane canisters was approved by the Lapu-Lapu City Council last April. Its implementation was delayed due to the election activities.

Many of those living in the area, mostly boarders, were using refilled butane canisters. Despite the ordinance, refilled canisters are sold openly in markets and sari-sari stores.

Radaza said that safety should not be compromised by convenience as lives and properties are, above all others, more important. She is hoping that people will just understand that the city is only after their safety and welfare.

ABC President and Gun-ob Barangay Captain Jose Dungog said he already refused to give a barangay clearance to an LPG retail store after learning that they also refilled butane canisters.

Meanwhile, the fire victims who are now temporarily housed in schools classrooms will be transferred to the gymnasiums of the Pusok National High School and the Pusok Elementary School in order to avoid further disrupting classes.

“We are preparing the covered gymnasium at Pusok National High School and Pusok Elementary School Gym where they can stay longer than three days,” he said.

As of yesterday, the City Social Welfare and Services Office recorded about 1,500 individuals with 292 families who were displaced by the fire.

CSWS Office chief Ermilita Degamo said the house owners and renters will receive financial assistance from the city, ranging from P5,000 to P10,000 depending on the size of their family.

For now, they are providing meals but are also encouraging donations as their supplies will not last long.

Read Next
CCPO returns vehicles not subject to recall order