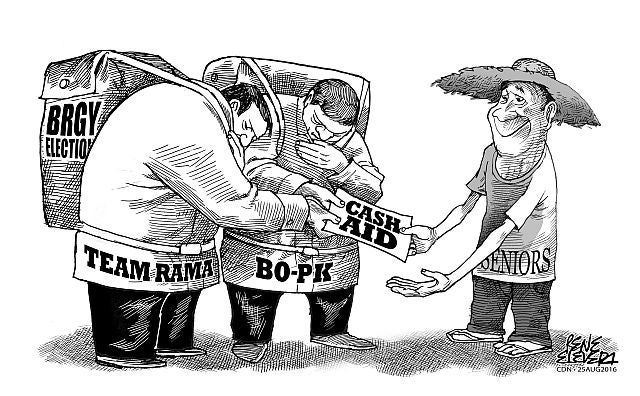 It’s barely been two months, and as expected, the Team Rama bloc in the City Council is already making some noise, parlaying its fiscalizer role to question nearly everything from the drug problem, the mayor’s loss of operational control over the police, to the payment of the loan for the South Road Properties (SRP).

But all of that berating and fiscalizing is set aside when it comes to last week’s distribution of cash aid to the seniors and other identified beneficiaries of the Cebu City government.

Like their counterparts in the Bando Osmeña-Pundok Kauswagan (BO-PK), the barangay officials allied with Team Rama also want to be seen and heard, and thus they denounced Cebu City Mayor Tomas Osmeña when he revoked Vice Mayor Edgardo Labella’s order confining the distribution of cash aid “exclusively” to barangay gyms and barangay halls.

To them, the mayor was clearly playing politics when he revoked the order and cited as basis the unverified reports / rumors that the cash aid will be given at the homes of BO-PK allied officials / candidates.

City Social Services chief Leah Japson quickly clarified that the distribution of cash aid will be handled by the City Treasurer’s Office personnel, not the BO-PK allied candidates nor officials.

As to where the Team Rama bloc got their reports, it most likely came from their supporters. But even if personnel of the City Treasurer’s Office were in charge with the cash distribution, incumbent officials or aspiring barangay candidates cannot be expected to lie low and let them do their job without them promoting their candidacies for the October barangay and Sangguniang Kabataan (SK) elections.

In a way, the vice mayor’s order was a preemptive move intended to prevent BO-PK candidates from engaging in some premature campaigning for the October elections.

While the distribution of cash aid shouldn’t be done in private homes, specifically on candidates’, it has yet to be determined if the venue of distribution should be done exclusively in barangay halls and gyms where incumbent officials from both sides of the fence can do their own campaigning at the sidelines.

Would Team Rama bloc not complain about the cash aid distribution if the City Treasurer’s Office coordinated with the regional Department of Social Welfare and Development (DSWD-7)? That at least won’t be misconstrued as yet another political gimmick or ploy since both offices are perceived as bureaucratic and apolitical.
In fact, maybe it would be better if all distribution of cash aid will be coordinated with the regional DSWD and the nongovernment organizations (NGOs).

But then again, why can’t we trust City Hall personnel to do their job regardless of their personal political beliefs and affiliation? Cebu City’s taxpayers who pay for this cash aid shouldn’t allow the parties from both sides to use this for their own self-promotional interest.