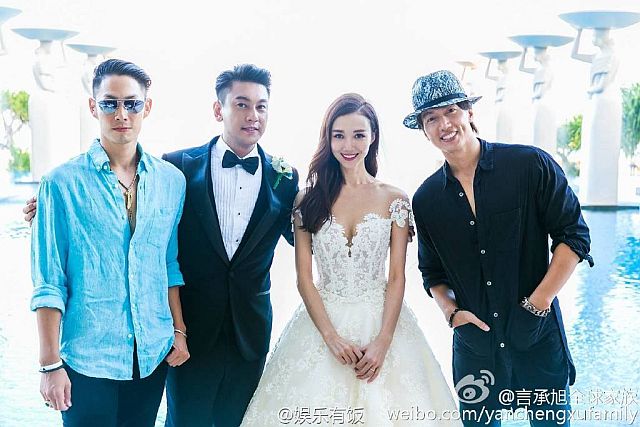 MANY avid fans of F4 have gone down memory lane as three of the five unforgettable faces of Taiwanese hit television series “Meteor Garden” had a mini-reunion for Ken Chu’s wedding in Bali, Indonesia.

The wedding served as a mini-reunion for the members of the F4 as Jerry Yan (Dao Ming Si) and Van Ness Wu (Mei Zuo) arrived at Ken’s wedding.

Both Jerry and Van Ness Wu were former bandmates of Ken, who played the role of Xi Men in the phenomenal series “Meteor Garden”, that also featured Taiwanese stars Vic Zhou (Hua Ze Lei) and Barbie Hsu (San Chai), who were not able to attend the wedding.

With Ken tying the knot, Jerry is now the only unmarried member of the F4. Van Ness got married in 2013, while Vic married his long-time girlfriend Reen Yu, November last year.

Photos from the event became viral on social media after they were uploaded in Jerry’s Facebook account.

Fans were delighted to see photos of Jerry, Van Ness and Ken, who seemed like they never aged at all.

Jerry came in a black polo while Van Ness opted for a cool shade of blue top.

“Meteor Garden” first aired locally on ABS-CBN in 2003 and made a Philippine television return in 2014.

According to reports, Ken and Han had a grand wedding reception where the three F4 stars Jerry Van Ness and Ken reportedly sang “Meteor Rain” from their 2001 album.