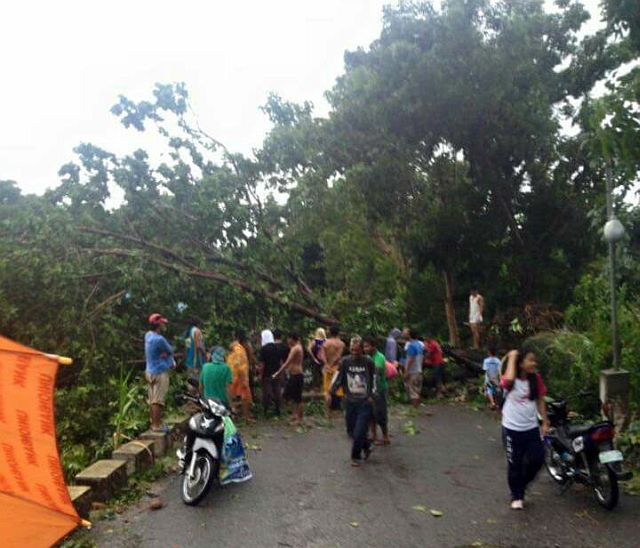 Residents of Barangay Odlot assess the damage wrought by the tornado which destroyed houses and uprooted trees. (FROM THE FACEBOOK PAGE OF Odlot Barangay Captain Emily Juanillo)

Odlot barangay chairperson Emily Juanilla said the strong winds turned a house upside down while another was broken into pieces.

Two pump boats were found hanging on tree trunks after the winds calmed down two minutes later, she said.

“It was a good thing that the houses were unoccupied,” she said in a radio interview.

Den Frederick Rodriguez of Bogo’s Disaster Risk Reduction Management Office said they recorded a wind velocity of 300 km/hr that lasted for about three minutes. It was accompanied by light rains.

Tabada told Cebu Daily News that the tornado which hit Barangay Odlot is locally known as “alimpulos”, a whirlwind that develops on land.

This would normally last 20 to 30 minutes before it dissipates.

A second kind of whirlwind that forms on water is referred to as “buhawi.”

Tabada said tornadoes are common during the thunderstorm months of May to September.

It also develops when there are tropical depressions.

The Low Pressure Area (LPA) in Mindanao has been causing rains in Cebu and the rest of the Visayas since Wednesday.

Based on the 10 a.m. weather forecast, the LPA was spotted 360 km east of Hinatuan, Surigao del Sur.

When hot air meets with cold air in the atmosphere, it triggers air expansion and the formation of a funnel shaped whirlwind, he said.

Tabada said it had been raining in Metro Cebu and northern Cebu area since 11 a.m last Wednesday and it could have triggered the whirlwind formation.

Juanilla recounted that she was at the Our Lady of Remedios Parish when the tornado hit at 4:30 p.m.

She said they saw the tornado forming on land and on the parish’s right side.

It later hit Sitios Proper 1 and Proper 2 in Barangay Odlot, one of Bogo City’s 29 barangays.

“The wind was twirling. We saw the plants uprooted and roofs flying,” she said.

Juanilla said strong wind was felt in their area for about a minute or two.

She said the tornado destroyed four shanties and damaged 13 others.

It also destroyed four pumpboats and damaged six others.

Juanilla said three Odlot residents were injured during the incident.

Two were on board a tricycle which turned turtle when strong winds hit.

Juanilla had yet to determine injuries on the third victim. CDRRMO records show that four persons — Luche Edisan, 30; Jonathan Villarin, 45; Consuelo Gallardo, 52; and Nasario Pulgadas, of undetermined age — were injured.

Christian Yurango of the city’s Public Information Office (PIO) said the strong winds also blew away the barangay’s tanod outpost as well as the roof of its barangay hall.

Officers of the City of Bogo Police Assistance Team help set up tarpaulins as temporary roofs to protect the barangay hall’s computers and documents from being soaked by rain.

A separate assessment is made on damaged crops which included banana plants.

Power was restored six hours after the tornado hit.

Pagasa weather specialist Jomar Eclarino said the whirlwind seen in Barangay Odlot was already the fourth reported to their office this year.

On June 12, a waterspout was sighted in the waters located in between Bantayan Island and Daanbantayan in northern Cebu and another waterspout in Camotes Islands on June 30.

A whirlwind was seen in Compostela town on July 1.

However, all four sightings have not been confirmed. Eclarino said based on Juanilla’s description, it’s possible that a tornado hit their area.

“We have to first see a video of the circulating wind and assess the damage it caused before we will be able to finally conclude that it was indeed a tornado,” Eclarino said.

“Its intensity is much stronger than that of a typhoon, but the wind does not stay long unlike in a typhoon,” Eclarino said.

Eclarino said tornadoes are common during the months of September and October when thunderstorms occurrences are also common.

But he said that Pagasa does not have the technology to detect tornado occurrences.

What Pagasa has is a Doppler radar that detects the possible occurrence of thunderstorms.

Eclarino said they are also doing a study on why tornado occurrences are common in northern Cebu towns.

Read Next
Cebuanos told to be careful with constant raining