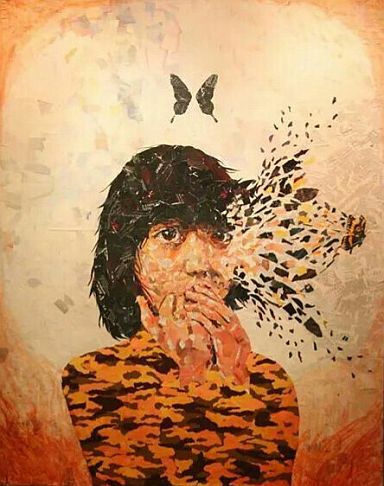 Fatima Village is situated along the shores of seaside Barangay Ibabao, Cordova town, and in the morning of September 8 this year, Cordova Municipal Police Office authorities barged into two adjacent houses and rescued seven minors from the web of cyberpornography.

Cases of minors as victims of this particular cybercrime have landed in the front pages of Cebu’s local newspapers since 2011.

And during the early days of January 2014, it caught the attention of national media which led to Cebu being dubbed as one of the “cyberporn hotspots” in the country.

It was on those days when the police, government officials and volunteers from related nongovernment organizations were acting on the alarming issue that University of the Philippines Cebu (UP Cebu) Fine Arts student Ferdinand Aragon was thinking about the best and appropriate subject for his art installation.

His artwork would then be his entry for the 38th Jose T. Joya Exhibit and Awards competition held that year.

After reading and watching news headlines about the rampant cases of cyberpornography emerging in Metro Cebu with minors as the usual target and victims during late 2013, Aragon decided to dedicate and portray an innocent child as the subject of his art piece.

“It was just disheartening to know that some of the suspects were their own parents,” said Aragon as he started work on his art installation.

It took him only a week to finish and present it, and during an interview with Cebu Daily News, Aragon said he was more than shocked for bagging the 1st place of the art event.

Titled “Innocence,” it was his first Jose T. Joya award-winning creation which bested more than 60 art installations made by various artists from different parts of the country.

“I was still a freshman at that time, and some, if not all, the exhibitors and competitors there had already ventured into art way back in the 1980s — I was not even born back then! But I am really grateful to be recognized and be part of these (sic) distinct group of individuals,” he said. 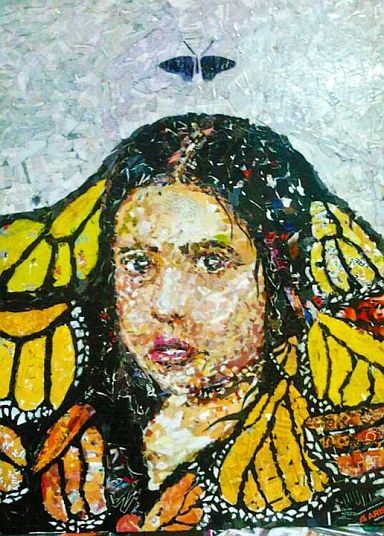 His winning art installation, “Innocence” was a paper collage made from torn pieces of back issues of magazines, dipped into buckets of white and golden yellow paint. The materials were used to create the image of a girl with the wings of Monarch butterflies as her hair.

For Aragon, children portrayed in all forms of art had a unique, significant impact to the people.

He said it also had a different kind of fulfillment in his part, especially that it enabled him, in his own ways, express the loss of a child’s innocence for the perverse benefits of the adult.

“Seeing the image or illustration of a child in an unsettling backdrop provokes an individual’s emotions deeper than the usual. We gain sympathy from them faster than staring at artworks which depict the adult life,” he added in Cebuano.

News on the cyberpornography cases uncovered by authorities reported this year has reached Aragon, who said that all issues linked to children would forever remain as a timeless concept.

“Issues on children as victims are still happening now, and we are obliged not to turn a blind eye towards them. For me, any form of art should transcend time just like seeing how children’s innocence are sacrificed and wasted,” said Aragon, who reflected on his award winning piece, “Innocence.”

To voice his concern especially against cyberpornography, Aragon said he had decided to place children as his artworks’ subject, which he had dedicated to them.

Although he is not an outspoken advocate on promoting a safer society for all children, Aragon said he wanted to express his advocacy in a way that people from all walks of life could relate to.

In his case, it is through paper collages created from recycled papers.

Bullet to a Butterfly

Last February 2016, Aragon again bagged 1st place in the 40th Jose T. Joya Exhibit and Awards for his collage named “Bullet to a Butterfly.” His second Joya–winning piece illustrated a girl with a shocked expression with the other side of her face shattered to bits.

“To be frank, these butterflies bear no deeper meanings. They just came out of my imagination, and I told myself, why not use them as a motif to all my pieces?” Aragon said.

He said he was dedicating it to the children, who became victims of violence brought by civil unrest, specially those children in the Syrian conflict.

The 22-year-old Aragon, who was raised and born in Cebu City, is also a long-time volunteer for the children ministry in the church where he and his family goes.

He said he has found happiness and fulfillment in teaching young children in their church about the basics of art.

“It’s fascinating to see how their curiosity leads them to learn something like they would ask me how to cut out paper shapes in the right way.

Sometimes, observing them experiment with coloring materials and just appreciating the simple aspects of art make me happy,” he added.

On the night when the Jose T. Joya Gallery in UP Cebu was revealed to the public, another collage Aragon created was already on display in the gallery.

Titled “Child Hermit,” the piece depicted a child whose hair was styled with that of a hermit crab’s shell.

“The concept behind it is about the issue of children left in the streets,” Aragon explained.

It is just one of the more than 20 masterpieces of Joya winners displayed for Gawad Joya, which is open to the public from August 24 to September 16.

Aragon received a certificate of recognition for donating his “Child Hermit” to Gawad Joya.

Since 1976, the event already recognized at least 40 artists from different regions in the country.

Most of them, including Aragon, gathered last August 24 for the unveiling of the Jose T. Joya Gallery marker in the Undergraduate Building of UP Cebu, the first gallery marker established outside of Metro Manila.