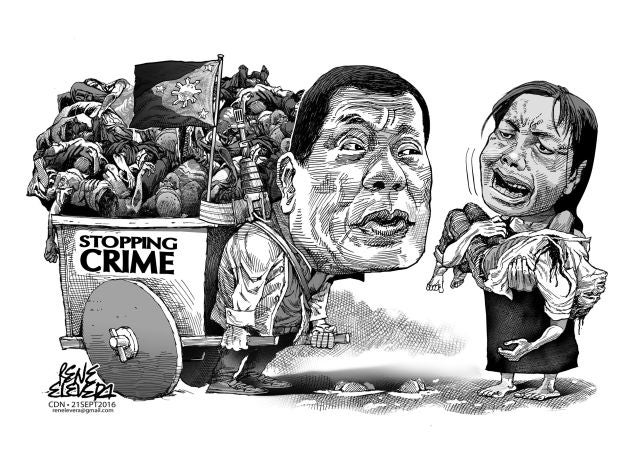 In the 1992 film “Lethal Weapon 3”, LA cops Martin Riggs (a pre-scandal Mel Gibson) and Roger Murtaugh (Danny Glover) were relaxing at a burger stand when Riggs saw a drug deal going down and headed to the area to investigate.

As expected, the investigation went south and Riggs and Murtaugh engaged in a shootout with the suspects which ended with Murtaugh shooting down one of them who happened to be a teenage friend of his son.

Despite Riggs’ reassurance that it was a “clean shot” and Murtaugh was justified to shoot down the youth in self defense, Murtaugh was inconsolable and drank his grief at shooting down his son’s friend.

In the Duterte administration’s war against illegal drugs, are the perpetrators of the extrajudicial killings that claimed the lives of these drug suspects ever felt any remorse over the deaths of those killed in the crossfire, especially the children of those suspects whom they won’t hesitate to shoot down in front of them?

President Duterte promised that the war will be relentless and ugly and in a recent pronouncement asked the Filipino public that he be given another six months to rid the country of illegal drugs.

He said he didn’t realize the full scope of the country’s drug problem until he assumed office and acknowledged that he cannot afford to kill everyone tied to the illegal
drug trade because some of them either have connections in the government or are working in government.

But among the many problems in Duterte’s relentless drive against criminality and the illegal drug menace is the continued extrajudicial killings committed by “vigilantes”, whom a large section of the public believed to be either police officers under orders from superiors to do away with due process and simply exterminate low level and middle level drug dealers and suspects or are groups of people inspired and motivated by the President to hunt down and eliminate these drug suspects.

Or as the police hierarchy would claim, the extrajudicial killings are committed by warring drug syndicates as a diversion to lay the blame on the police and deflect attention on their trade.

Either way, collateral damage had occurred in these summary executions and one such victim is a 16-year-old girl who was shot down by these vigilantes along with a certain Ramonito Ibona, a suspected drug runner for slain drug dealer Jeffrey “Jaguar” Diaz, at their home in Tres de Abril, Cebu City.

While he may have no compunctions over razing down a thousand and even a million drug suspects, is the President and his people so callous and cold-blooded that he would ignore the deaths of young people caught in the crossfire of his war against crime?

While the public has little choice in deciding how to conduct this war, Filipinos have every right to demand from Duterte that he should do things right in waging his war against crime.