When Martial Law tales are busted 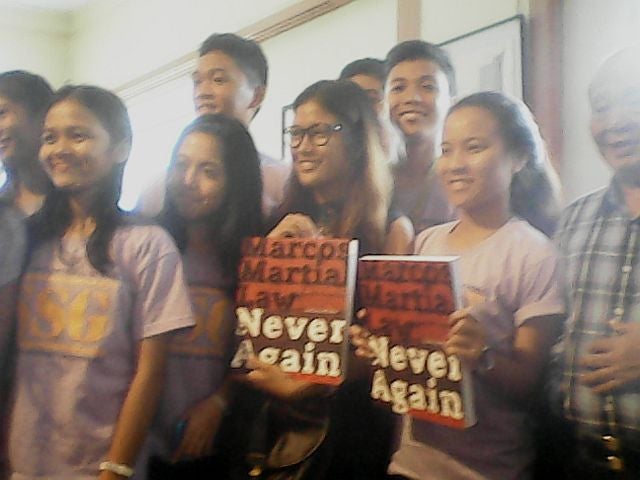 Seventeen-year old Tracy Catherine Talledo (fourth from the right) used to think that Martial Law was the Philippines’ “golden era” before she began to educate herself. She is now among millennials who have begun to see things differently from the glossed over accounts of the Marcos dictatorship.
(CDN PHOTO /Morexette Marie Erram)

Storytelling is often associated with childhood. The concept often illustrates an image of a child listening intently to an elder’s narration about a world filled with fairies, unicorns, dwarves and other mythical creatures found in classical fairy tales.

Tracy Catherine Talledo, 17, recalls how her grandparents, when she was just a little kid, sat by her side and told her about a ‘golden age’ that once happened in the Philippines.

This ‘golden age’, according to Talledo’s childhood recollections, was about the time when the Philippines’ economic status was said to be in boom.

The student leader remembers how the accounts of that era that she had drawn out from her grandparents were similar to a fairy tale as she believed it to be the time when skyscrapers and other infrastructure sprouted here and there “just like magic”.

The only child of a teacher and a government employee grew up carrying the stories of Martial Law as sacred, like a nun carrying a rosary from the pew all the way up to the altar.

But like most children, transitioning into adulthood, her beliefs on the so-called “Golden Age of Martial Law” which were rooted on fairy tales, slowly began to fade.

One night in 2012, just a few days after she started her freshman year in high school, a documentary showing the other side of the ‘golden age’ her grandparents described was playing on their family’s television set.

“I recall it very clearly. I had my legs on the center table and I was lying with my back on the couch. It was just a voice-over narration of torture victims and survivors during the Martial Law period. Coupled with accurate reenactment, I began to question about the ‘golden age’,” said Talledo in Cebuano.

Like most kids, she spent her childhood years with hardly any cares — playing in the streets, trying out different sorts of locally made candies, and watching cartoon shows; while the people milling around and about her immediate social environment believed that the Martial Law era was “the best”.

“The best years in terms of economic aspect, but when I started to look the other side — it came with a cost, and it’s not something we can forget. Because the cost entails the lives of people who fought for freedom,” said Talledo now that she knows more about that era.

When asked what elements of the TV documentary convinced her to have second thoughts on the whole concept of the ‘golden age’, she replied that it was the jewelry of then first lady Imelda Marcos, and the origin of the term Imeldific.

“It remains a mystery to me how she or her husband(Ferdinand Marcos), obtained the money to purchase a single jewelry worth millions of pesos – and I guess the value was even a lot before than today,” she said; as everything that followed after that night was a complete turnaround of the beliefs she held strongly as a child.

“From then on, I became curious on the truth behind Martial Law,” said Talledo.

She started to ask questions, and most of the time took the effort to answer them herself by reading rare books about the history of the Philippines during the years between 1972 and 1986.

She also attended seminars and forums which tackled the Marcos regime; and listened to the testimonies of torture victims and other survivors of Martial Law atrocities.

“I started to gain more knowledge on the horrors of Martial Law to the extent that the idea of it being the time when our country was most progressive did not appeal to me anymore,” Talledo said.

Talledo, now on her senior year in high school, is the president of the Abellana National School Supreme Student Government (SSG).

And on the afternoon of September 10, Talledo witnessed a different kind of storytelling — far from the one she experienced when she was still a child – inside a pizza cafe along Gorordo Avenue, Cebu City.

Around 44 students from different schools and universities in Metro Cebu gathered in a circle around former Carcar City vice mayor Atty. Democrito Barcenas and Senator Risa Hontiveros as the two former freedom fighters narrated to the youth the stories of people who suffered under the Marcos regime.

Barcenas talked about being jailed for “asking questions about the Marcos administration”; while Hontiveros reported about the life and death of Archimedes Trajano, a 21- year-old Mapua Institute of Technology student who had the courage to ask Imee Marcos in an open forum, “Must the Kabataang Barangay (National Youth Council) be headed by the President’s daughter?”

Trajano died in September 1977 after he was picked up from the forum and tortured for 12 to 36 hours, by men believed to be Imee’s bodyguards. Imee, the eldest child of the late dictator, Ferdinand Marcos and his wife, Imelda, has been the governor of Ilocos Norte since 2010. Before that, she was Representative for the 2nd district of the province.

“The more I know, the more everything made sense to me. The figures and pictures started to add up. It wasn’t just about the jewelry, and the modern infrastructure,” Talledo said.

Talledo explained that while she had earlier read, watched and listened to testimonials of individuals, who landed in jail for openly criticizing the Marcos administration, it was Hontiveros’ accounts of Trajano that struck her deeply.

“I know of students fighting for their rights in the streets and being jailed. But I never heard about Trajano until now. For some reason, I cannot help but picture myself asking simple questions about the government’s performance and then ending up dead. He was a student, and I am too,” she lamented. (To be continued)

Read Next
Youth groups to rally against EJK