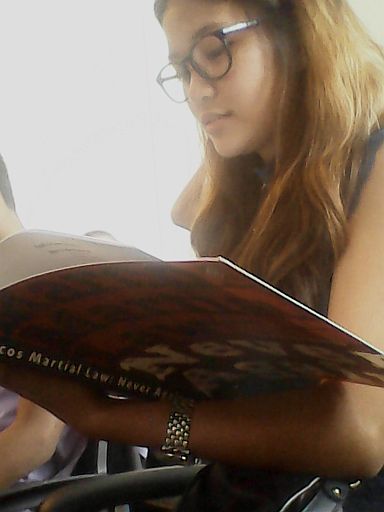 17-year-old Tracy Catherine Talledo says young people who still believe that Martial Law in the Philippines was the “golden era” should learn to read more to know the real story behind that era marked by corruption and human rights abuses (CDN PHOTO/ MOREXETTE ERRAM).

The relatives of 17-year-old Tracy Catherine Talledo, most of whom remained loyal followers of the Marcos family, knew about her newfound anti-Martial Law beliefs.
But the young student leader gave a light laugh when she told Cebu Daily News that they do not bug her for having opposing views.

“In our household, we don’t talk about it when the entire family is gathered around the dining table. In my case, I rarely ask them questions,” she said.

“Instead, I will tell them straight what I now believe in. And they just wholeheartedly accept it, even my grandparents,” Talledo narrated of her elders who had once told her of the Martial Law years as the “golden era,” when she was just an impressionable child.

Three generations of Talledos live under one roof, with most of them having political views rooted on the Marcos myth of a prosperous period in the country.
Now in her senior year in high school, Talledo said she might have struggles expressing her opinions to a whole family who views things very differently from her but “I am used to it. Actually, we are pretty open about it,” she said, smiling widely.

“In our family, we respect what the others believe. It will always be family first over others,” she added.

“We vowed to set aside our differences, whatever they are, because in the end, our family will be the first people we run into when we need help,” she added.

If there is one member of her family who closely echoes her opinions, Talledo said that it would be her mother Rosalina, a public school teacher.
Rosalina approached her the moment she knew about her sudden change of political views.

“We exchanged stories. I told her what I learned in school, in the internet and from the books. In return, she described to me how she personally saw some abuses during the Martial Law years,” said Talledo.

Talledo’s mother spent her youth in the seaside municipality of Moalboal.

“My mother told me that military and police presence in the countryside was more intensified than that in the cities. And she personally saw how abusive officials shot and killed suspected communists right in front of her,” Talledo narrated.

“She even said that, sometimes, she could hear women screaming for help as they were being raped. I guess that’s why she wanted to be neutral on this,” Talledo added.

Knowing that her other relatives could not be swayed into adopting her critical views against Martial Law, Talledo said she rather talks about it with her friends.

“Most of them had the same experience as mine. They were told by adults and family members on how ‘progressive’ the Philippines was during the Martial Law,” Talledo said.

“When I discussed to them what I learned, they were shocked. Right now, they are holding a critical stand towards Martial Law,” she said.
It was then that she realized that, in her own way, she could be an agent of change to influence young people like her to think critically instead of believing everything in the internet.

“Especially that we don’t have firsthand experience on what really happened, millennials such as ourselves can really be gullible to facts distorting the truth behind Martial Law,” she lamented.

“I admit I am still confused with what really happened, but I will hold firmly what I now believe in — that it was one of the darkest periods in the country,” said Talledo in Cebuano.

She further pointed out that citizens, especially the young, should not entirely rely on the internet because there are some things written there that are not entirely true.

Citing instances when test papers in some of her classes purposely framed questions to teach students that “Martial Law was the golden age of the Philippines,” Talledo expressed concern that historical revisionism may take over the current academic curricula in the basic education levels.

Talledo, president of the Abellana National School Supreme Student Government (SSG),believes that the lack of valid educational resources in campus could make it easy for certain people to revise history and for students to remain ignorant of the truth.

However, Talledo’s school was one of the more than 10 recipients of a book titled “Marcos Martial Law: Never Again” by renowned Filipino journalist Raissa Robles.

The book is a compilation of the accounts and records of individuals who took part in dismantling the dictatorship of former president Ferdinand Marcos and regaining the country’s freedom.

It was Martial Law activist, now Senator Risa Hontiveros who handed several books to Talledo and a few of her fellow officers of the SSG when the senator came to Cebu for a visit to talk about the Marcos years.

Talledo held onto her school’s book copies like a child carrying her favorite collection of fairy tales.

Fueled by curiosity, Talledo flipped through the pages of the book and couldn’t hide her excitement that she was about to learn more about the things that really happened in the years between 1972 and 1986.

“This is another kind of storytelling that I am really interested to know about, and I’m very grateful our library received not just one copy but three!” she exclaimed.

The Martial Law storytelling event attended by Hontiveros was organized by the Student Council Alliance of the Philippines (Scap)and Akbayan Youth party-list.

Read Next
Online trolls a challenge to true freedom of speech