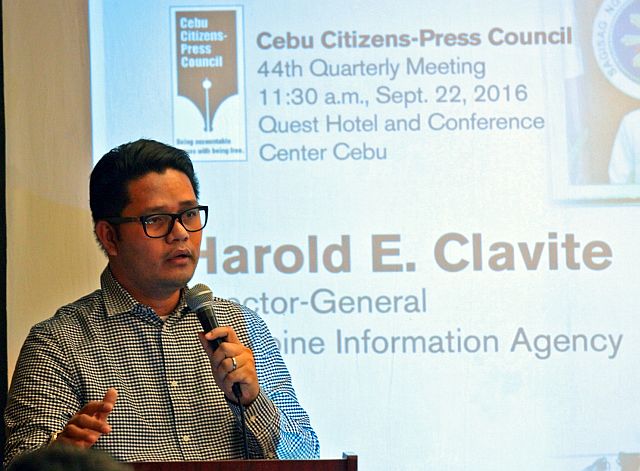 The Cebu Citizens-Press Council (CCPC) yesterday took a step to reinforce the freedom of information order to help Cebu journalists gain easier and faster access to government information and transactions.

The CCPC, during its 44th quarterly meeting at the Quest Hotel Cebu, passed a resolution encouraging local government units (LGUs) to take part in fulfilling the intent of the Freedom of Information (FOI) measure as initially provided by Executive Order No. 2 (EO 2), which was signed by President Rodrigo Duterte on July 23.

EO 2 allows every Filipino to have “access to information, official records, public records, and to documents and papers pertaining to official acts, transactions, or decisions” made by all government offices under the Executive Branch.

According to the CCPC resolution, it aims to spur the province and cities of Cebu to participate in promoting open and transparent governance by facilitating a “speedy and simplified system” of releasing records and information through announcements, website and social media posts, or sending of, in urgent cases, e-mail messages to media outlets.

Michelle So, Superbalita editor in chief, said that the action would be highly beneficial to newsroom operations considering the urgency of every news organization’s publishing deadlines.

Aside from that, Harold Clavite, Philippine Information Agency (PIA) director-general, cited the agency’s plan to partner with the media in educating the public about the government’s projects and development efforts. He also promised to raise local reporters’ concern on the difficulty of interviewing the president during his visits here.

Read Next
Davide issues executive order for FOI at Capitol