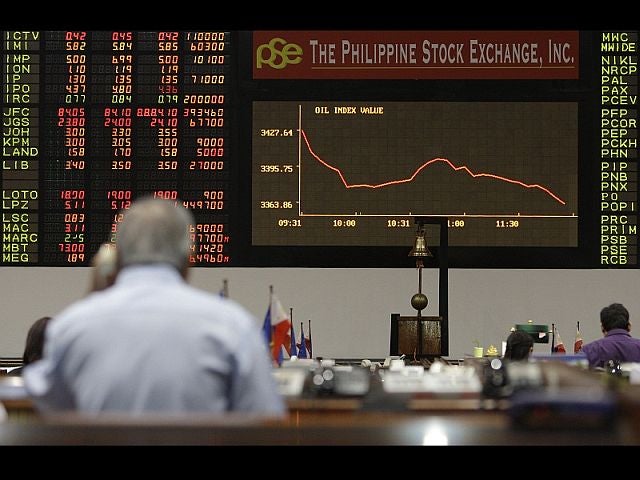 A trader looks at the electronic board showing a downward graph at the Philippine Stock Exchange (PSE) in Makati, Philippines in this August 2011 file photo. (AP FILE PHOTO)

Business leaders in Cebu remain optimistic of the country’s economy despite the seven-year low plunge of the Philippine peso in the Philippine Stock Exchange on Monday.

Glenn Soco, Mandaue Chamber of Commerce and Industry (MCCI) president, said he believed that this development would not have a negative impact on the economy as other economic indicators had remained strong.

“Businessmen remain to be bullish on the economy because of the economic reforms as proposed by the government, as well as their intensified drive to improve peace and order,” Soco said in a text message.

Soco said the seven-year low plunge of the peso is a correction happening to the actual value of the currency.

He said that it was brought about by the strengthening of the US dollar because of their improving economy and Federal policies.

Melanie Ng, Cebu Chamber of Commerce and Industry (CCCI) president, admitted that the present situation is volatile due to a number of factors.

She cited as among these factors uncertainty over the US Fed’s next policy action, demand for US dollars during peak importation season in preparation for Christmas, and a strong demand for foreign exchange which had weakened the peso.

“The market is jittery because of these factors,” she said.

But investors could find comfort in the presence of stability in the country, Ng said.

She went on to say that market perception would play a role in arresting the downtrend and that she would hope stability would be attained through the new administration’s initiatives.

“Such that positive impact on these initiatives will manifest soon to deter any negative drawback,” said Ng.

Gordon Alan Joseph, Cebu Business Club (CBC) president, said that while the weakening of the peso against the dollar is due to external factors, it is aggravated by the fact that the Philippines has been receiving negative press worldwide.

“Investors have begun to look at other country options or are taking a wait-and-see attitude,” he said.

Joseph said that these investors were withdrawing funds from the country or that they would not be investing until the perception of the Philippines would improve.