Suspect in mauling to death of shopper arrested after 3 years 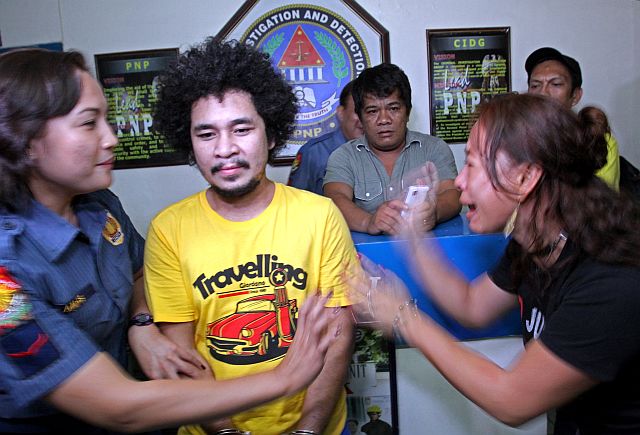 Marie Shantylle Ducayag (right), sister of Mario Alfie Ducayag who was mauled to death by security personnel of Gaisano Metro Colon, tries to attack suspect Mauricio Doblados, who was arrested by CIDG operatives 3 years after the incident (CDN PHOTO/JUNJIE MENDOZA).

Three years after the mauling to death of a shopper by security personnel of a department store, his family may finally get the justice they have long been yearning for.

Operatives of the Criminal Investigation and Detection Group (CIDG) on Friday arrested the former security officer of Gaisano Metro Colon who was implicated in the fatal mauling of Mario Alfie Ducayag, whom he allegedly mistook for a shoplifter, on April 12, 2013.

Mauricio Doblados Jr. was at a store in Balingoan town, Misamis Oriental when the police served the warrant of arrest issued by Judge Wilfredo Navarro of the Regional Trial Court Branch 19 in Cebu City.

Doblados, 33, has been in hiding since April 2014 and transferred from place to place to avoid being tracked down by policemen, said Insp. Raydian Corales, the provincial chief of the CIDG Cebu.

“He went to Bohol and Iloilo before he stayed in Misamis Oriental. When he saw us, he tried to resist arrest, but we still got him,” Corales told reporters.

Ducayag’s mother Fe Soledad said Doblados was arrested a day before her son would have celebrated his 27th birthday.

“This is the best birthday gift we could give him. This is an answered prayer. The time has come for him (Doblados) to answer for my son’s death,” she said.

Doblados said he was willing to face the charges against him but insisted, “Limpyo ang akong konsensya ug ako ni pamatud-an didto sa korte (My conscience is clean and I will prove it in court).”

He apologized to the Ducayag family for Alfie’s death.

As he insisted on his innocence, he pointed to Jeffrey Aquino, the former security camera operator of Gaisano Metro Colon Mall, as the man who handcuffed and beat up Alfie.

“He (Aquino) punched Alfie on the body three times before he hit the victim with his knees. I didn’t expect him to do that,” he said in Cebuano.

But Fe Soledad said, “I am a human being. I can forgive. But how can we forgive someone who keeps on defending himself and who went on hiding for three years? All we want is justice.”

“You are a smart guy. Let’s see where that will bring you,” Marie Shantylle told Doblados at the CIDG-7 office in Cebu City.

Although the trial against Doblados has yet to start, Marie Shantylle hopes justice will be served to her brother.

“This (Doblados’ arrest) is a big step. He has chosen to speak for himself. I hope the puzzle on how they killed my brother will be completed,” she said.

Doblados, meanwhile, denied he was in hiding, saying he was waiting for the resolution of the Petition for Review he filed before the Department of Justice seeking the dismissal of the charges against him.

He said he has not received any ruling yet.

(I was not in hiding. I was waiting for the resolution of my petition for review filed before the Department of Justice. I was not planning to escape this problem because life is bad if we are always hiding. This was a last resort, but whatever the result, positive or negative, I would face it. Even if I was not arrested, I would still have faced the case even if the result was negative so that the case would move.)

Last April 12, 2013, Alfie was mauled inside the security office of Gaisano Metro Colon.

Alfie, who was a father of two, was taken into custody on suspicion of shoplifting when he couldn’t show a receipt for a pair of Sandugo brand slippers in his shopping bag. Also in the bag were milk, biscuits and diapers he bought for his children.

Jeffrey Aquino, the mall’s former security camera operator, has been in jail since May 2014.

Doblados and Aquino are facing murder charges in court for Alfie’s death. Murder is a non-bailable offense.

When the incident happened, retired Maj. Gen. Victor Garcia, vice president for security of Gaisano Metro, said the role of the store’s security officers is just to fill in the Suspect’s Information Sheet and turn over the shopper to the police.

“As far as our procedures are concerned, security officers of the department stores are not supposed to maltreat, harm, physically abuse or even verbally abuse suspected shoplifters,” he had then said.

An inquiry by the National Bureau of Investigation in Central Visayas (NB-7) showed that Alfie “validly purchased the sandals” but lost the receipt. NBI-7 investigators said Aquino handcuffed Ducayag and solely inflicted blows on the victim’s body.

Though he didn’t participate in the mauling, Doblados allegedly wanted to handcuff him so he could not fight back while being mauled.