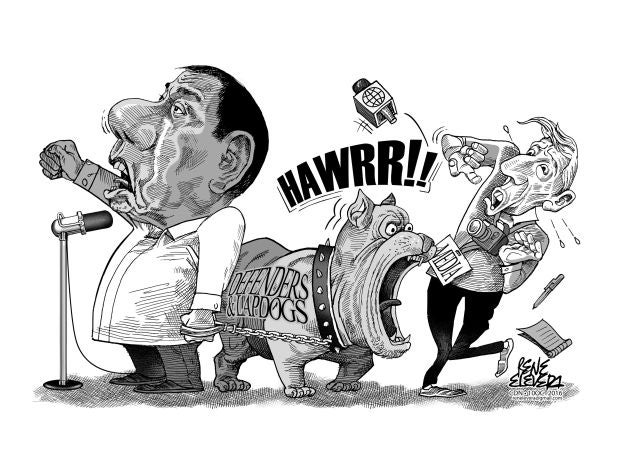 Just as the Duterte administration continues to soak up on the warmth of its high survey ratings and the adulation of its followers, the national and local media find themselves in the crosshairs of the President’s apologists, defenders and lapdogs in government, social media and even in mainstream media.

Two Reuters reporters based in the Philippines have been subjected to hate comments from the President’s apologists and trolls for quoting President Duterte on his now infamous “Hitler” analogy in relation to the country’s drug problem.

These apologists, trolls and lapdogs have taken to social media to lambaste and even threaten the two reporters for merely reporting on what the President said — that he’d be happy to slaughter three million drug addicts, comparing it with Hitler slaughtering three million Jews.

That the President had to attend a Philippines-based Jewish association meeting to explain his side showed just how much pressure was brought upon him by the global condemnation of his irresponsible and inflammatory statements relating his war on illegal drugs with the Holocaust.

The social media harassment/hate campaign on Reuters reporters Karen Lema and Manuel Mogato by Duterte apologists and keyboard bullies has resulted in memes featuring their faces that call for punitive action against them and worse, demand for further restrictions on press freedom and freedom of expression.

And the President and his administration have done nothing at all aside from a few weak appeals for calm and sobriety to his followers in order to stop these online assaults and hate campaigns.

It is only in the Age of Duterte when we see an administration being defended by followers to the brink of actual threats of violence and a vicious smear campaign designed not only to discredit but also to silence their targets into submission.

We can only speculate that a lot of these defenders, these apologists and lapdogs were trained and indoctrinated to the point of fanaticism by people well versed in the ways of public and media relations as well as those in the underground who have gone mainstream and are friendly with the communists.

At the risk of sounding naive, we ask if this is what the President meant when he mentioned right before he was sworn into office that he will expand freedom of expression and of the press.

If we go by the current state of affairs, that expansion may likely mean giving his followers, apologists, defenders, trolls and lapdogs all the room in the world to ventilate their hate and the President’s vitriol on the mainstream media and his hapless critics as well as anyone who dares question his administration’s war on illegal drugs and anything associated with him in hopes of silencing them into submission and discrediting them before the eyes of the undecided.