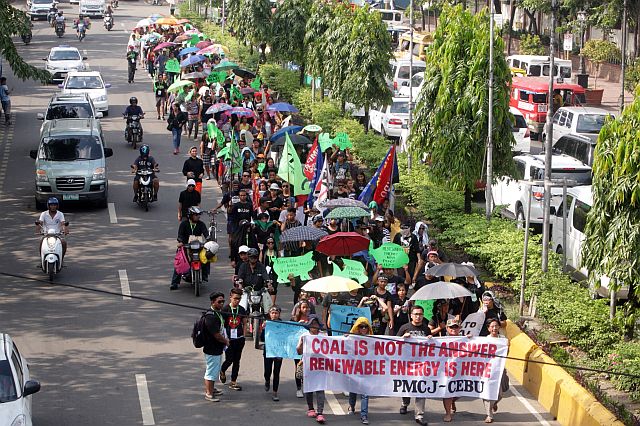 MORE than a hundred anti-coal protesters and supporters of the Philippine Movement for Climate Justice-Cebu (PMCJ-Cebu) called on President Rodrigo Duterte’s administration to stop its continuing policy to use coal as fuel for the country’s development.

The protesters took to the streets of Cebu City last Monday to express their stand against this government policy.

Lawyer Aaron Pedrosa Jr., head of the energy working group of PMCJ and secretary general of Sanlakas, said that the use of coal as an energy source must be stopped because it has dire effects on the environment, it is not sustainable and runs against the welfare of the people.

Pedrosa in his speech during the protest cited the country’s potential to harness renewable energy which could be used to supply the country’s rising demand for energy without harming the environment.

He also said that the government continued to build coal plants and yet millions of Filipinos had no access to electricity.

Among the anti-coal protesters that participated in the event were those from Sugbuanong Nagpakabana sa Kalikupan (SNK), Pagtambayayong Foundation Inc., and Sanlakas, as well as participants from the different communities of Barangays Suba, Pasil, Duljo-Fatima, San Roque, Tinago, Careta, and Sambag II.