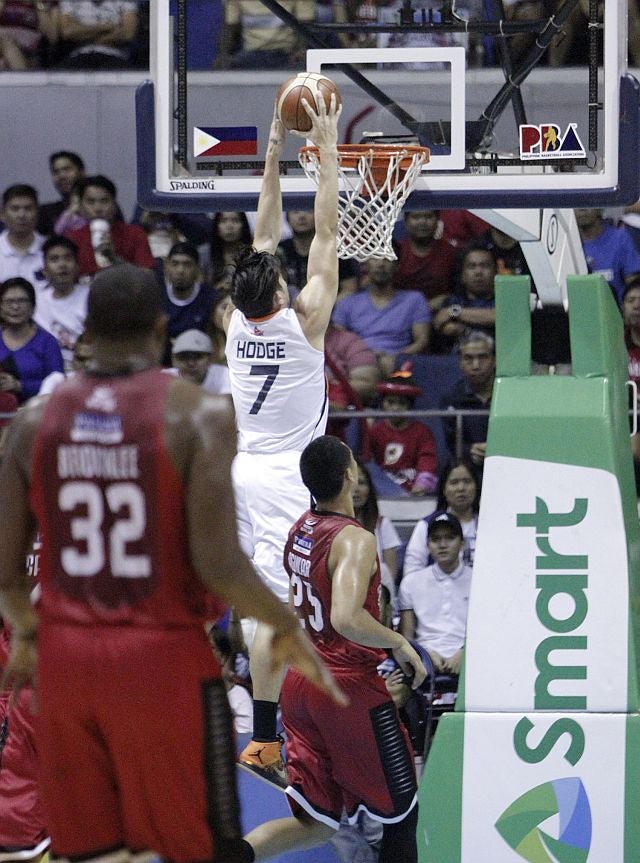 Meralco’s Cliff Hodge goes for a two-handed dunk during a fastbreak play in Game 5 of the 2016 PBA Governors’ Cup Best-of-Seven Finals at the Araneta Coliseum last night (PBA IMAGES).

The Barangay Ginebra Kings led from start to finish to pull off a critical 92–81 win over the Meralco Bolts in Game Five of the 2016 PBA Governors’ Cup Best-of-Seven Finals last night at the Araneta Coliseum.

The win allowed the Kings to post a 3-2 series lead, putting the league’s most popular ballclub a win away from winning its first crown since 2008.

Import Justin Brownlee had a monster showing for Ginebra, tallying 29 points and 10 rebounds and got solid support from Japeth Aguilar, who finished with 16 points, eight rebounds and three blocks.

Ginebra, the first team to win back-to-back games in the series as it also in Game Four, 88-86, entered the fourth period with a 73-59 lead.

The Bolts rallied, cutting the deficit to just five, 82-77, with three minutes left.

Meralco last threatened at 87-81 but Scottie Thompson dropped a game-sealing triple with 44 seconds to go.

Allen Durham led the Bolts with 20 points. Reynel Hugnatan chipped in 17, while Cliff Hodge and Chris Newsome chipped in 10 each.

Game 6 is set on Wednesday.