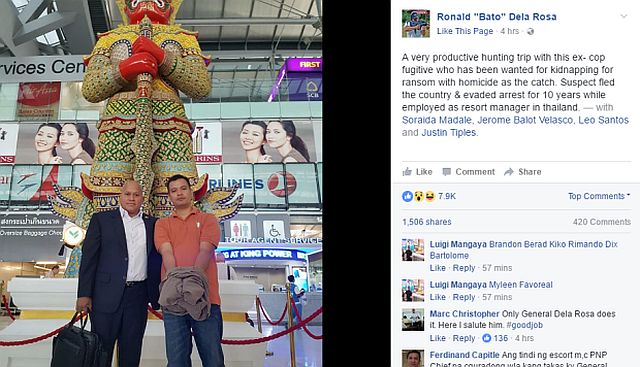 “A very productive hunting trip” was how Philippine National Police (PNP) chief Director General Ronald dela Rosa described his visit to Thailand as he brought home with him a former police officer charged with the abduction and murder of a Chinese-Filipino engineer.

Dela Rosa took to Facebook on Sunday to share a photo of him at a Thailand airport with the handcuffed fugitive, who was identified as former Police Officer 1 Alexander Pangilinan, an alleged member of the “Dos Pares” group tagged in the death of Michael Chan in 2005.

“A very productive hunting trip with this ex-cop fugitive who has been wanted for kidnapping for ransom with homicide as the catch. Suspect fled the country & evaded arrest for 10 years while employed as resort manager in Thailand,” he wrote in the caption.

Dela Rosa was guest at the anniversary of the Royal Thai Police.

Read Next
DepEd partners with Globe for Adopt-A-School program