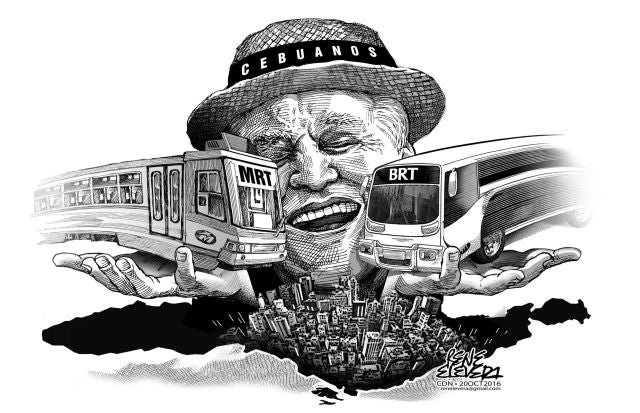 Is there any basis for Cebu City Mayor Tomas Osmena’s warning that the Bus Rapid Transit (BRT) project would be shelved in favor of the Light Railway Transit (LRT) project being lobbied by Presidential Assistant for the Visayas Michael Dino?

Apparently not, BRT project coordinator and Cebu City’s traffic czar Rafael Yap said as he pointed out that studies have already been completed on the BRT and bidding as well as work on the BRT terminal projects will proceed this year and the next.

The mayor’s warning was done more out of pique or irritation over what he perceives as Dino’s interference over the city’s mass transport program which Osmeña has shepherded and lobbied for two national administrations already.

But is the mayor’s suspicion and fears on a BRT cancellation justified? If that were the case, then Dino would likely receive strong opposition not only from the mayor but also from supporters of the BRT project who believe that it would help ease greatly the city’s transportation woes and reduce dependence on the passenger jeepneys which continue to aggravate Cebu City’s traffic congestion.

Given that possibility, it would be ill-advised for Dino to lobby for the cancellation of the BRT in favor of the LRT which would bring the city’s transportation agencies and stakeholders back to square one or the drawing board whichever analogy one prefers.

We also didn’t exactly sense any public opposition from Dino on the BRT project whose value and viability as a mass transport system was mirrored in the ongoing operation of the SM MyBus units that serviced routes that were previously exclusive to local jeepneys and buses.

There’s something positive and laudable to be said about public transport units that not only can accommodate a huge number of passengers in comfort and convenience but also service routes straightaway without making traffic disruptive stopovers in the middle of the road in order to load and unload passengers, which is what passenger jeepneys have long been doing and are allowed to get away with.

And this is precisely what the BRT offers which Dino and other BRT opponents may want to consider if they do plan to block the project in favor of the LRT. And as Yap again pointed out, several studies by foreign traffic experts financed by international aid agencies pointed to both the BRT and the LRT as essential in servicing the growing urban population of Metro Cebu and in linking the towns in the countryside to the urban centers.

So unless Dino is being egged on by either the mayor’s political enemies which Osmeña believes or by ardent LRT lobbyists like Rep. Samsam Gullas of Cebu’s 1st district to drop the BRT in favor of the LRT, then there is little to worry about in so far as the BRT’s fate is concerned.

Ultimately it would be up to President Duterte to decide on it, but considering that he assured the continuity of past transportation projects, the BRT is on the right track and the public can take comfort in that fact.