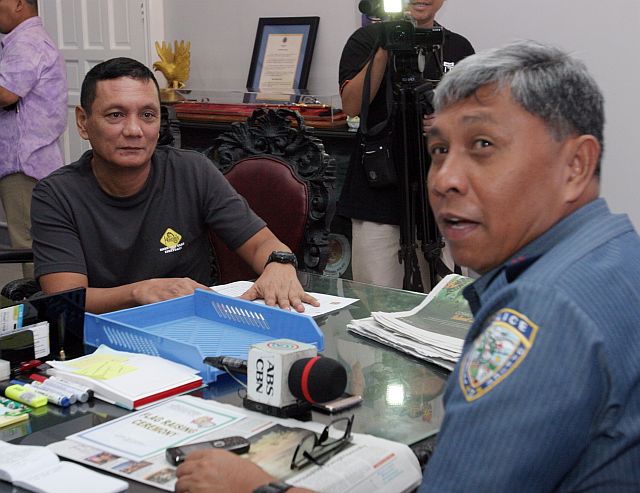 With just three years left in service, the controversial SPO1 Adonis Dumpit simply wants to go where he will be asked to.

“Kon unsay mando sa akong labaw, motuman ko (Whatever my superiors tell me, I will obey),” he said in an interview yesterday, three days after he was officially “returned” to the Cebu City Police Office (CCPO).

That cautious statement was expected from Dumpit, having weathered the controversies surrounding his release on bail from a Leyte prison in May, his reinstatement in the CPPO and his abrupt removal as Cebu City Mayor Tomas Osmeña’s most trusted close-in security aide and subsequent transfer to Bohol.

Chief Supt. Noli Taliño, director of the Police Regional Office in Central Visayas (PRO-7), ordered the 53-year-old policeman to return to the CCPO after spending the last three months in the Bohol Provincial Police Office in Tagbilaran City.

In an order dated Oct. 21, Taliño approved the request of Cebu City Councilor Dave Tumulak, the deputy mayor for police matters, to bring Dumpit and two other policemen who served as security escorts of Osmeña back to the city.

Dumpit, a sharpshooter and a multi-awarded policeman, said he was willing to be sent to any unit but, if given a choice, wanted to be assigned to the Special Weapons and Tactics (SWAT) where he used to be assigned.

Dumpit, who will retire on May 13, 2019, the day he turns 56 — the mandatory retirement age for policemen, also welcomed the possibility of being reassigned anew as one of the three security escorts of Cebu City Mayor Tomas Osmeña.

But Taliño said any request for police escort shall have to be addressed by the requesting local official to Philippine National Police (PNP) Director General Ronald “Bato” dela Rosa.

“I can give him (Mayor Osmeña) a police escort but only for 20 to 30 days. He might as well ask permission from the chief PNP,” Taliño said in an interview yesterday.

Last August, Camp Crame recalled Osmeña’s three police escorts as they did not have Dela Rosa’s permission to serve as the mayor’s security aides. Dumpit, Tejano and Batuhan were all sent to Bohol.

The recall order came after Osmeña was stripped of his authority over the local police following his public pronouncements that he no longer intended to support the Cebu City policemen.

Back then, Osmeña was in the thick of his own drug war and was angered by the relief of Senior Supt. Benjamin Santos as CCPO director without his knowledge.

But the National Police Commission (Napolcom) later restored Osmeña’s authority over the city police and Tumulak decided to also ask PRO-7 to bring the mayor’s three police escorts back to Cebu.

Taliño said he granted the request because Cebu City also needs more policemen and Dumpit will surely help fill in the vacancy since he had served the CCPO for a long time.

But as to whether or not Osmeña will get his favorite policeman back, Taliño said it would be all up to Dela Rosa.

“Only the chief PNP can approve those kinds of requests,” he said.

Taliño said before Osmeña can be granted with police escorts, a threat assessment will have to be conducted by the intelligence unit of the PNP to determine if there are threats to his life.

“The PNP is guided by policies and general guidelines governing the details of PNP personnel as protective security to government and civilian individuals,” he explained.

While there is no order from Camp Crame, Senior Supt. Joel Doria, CCPO director, said he will assign Dumpit, Tejano, and Batuhan to one of the 11 police stations in Cebu City.

“Definitely, sa patrol o station sila ilalagay. Pero sa ngayon, sa headquarters muna kasi bago pa lang sila nag-report.
(Definitely, I will assign them to the police station. But for now, they will temporarily stay at the CCPO headquarters since they have just reported for work),” he said in a separate interview yesterday.

Doria said he already talked to Dumpit in one of their breakfast meetings and during a conference with the station commanders.

“Well, I will assign them (Dumpit, Tejano, and Batuhan) to the police station. They have to function as normal operatives. I’ll have to see which police station,” he said.

Dumpit was tagged in the deaths of three crime suspects and the wounding of a dozen more in Cebu City since the late 90s as head of the city police’s crime busting group called “Hunter Team” that was fully backed by Mayor Osmeña.

In August 2014, however, he was convicted of homicide by the Cebu Regional Trial Court for the shooting to death of a 17-year-old robbery suspect in 2004.

Dumpit was placed behind bars for six years.

His lawyers filed an appeal before the Court of Appeals. On May 13, 2016, the appellate court granted his petition for bail pending resolution of his appeal.

He was released from the Leyte Regional Prison in Abuyog, Leyte last May 26 after the appellate court allowed him to post a P250,000 bail, which was granted pending resolution of his appeal after the court noted that Dumpit had actually served his minimum prison term of six years and exhibited good behavior during his incarceration.

Osmeña paid the P250,000 bail of Dumpit who was even fetched from jail by Osmeña’s son, Miguel.