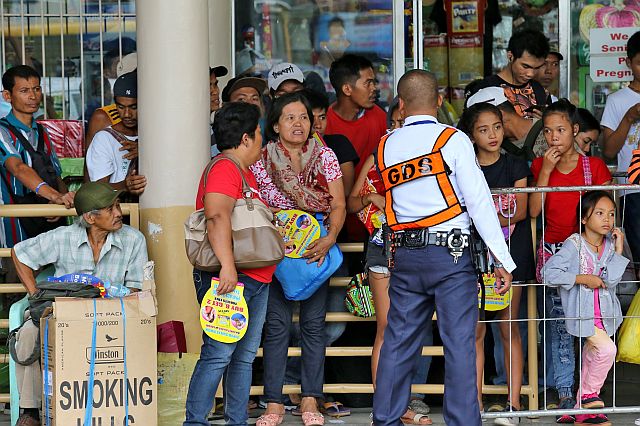 TIGHT SECURITY. A security guard holds in line a crowd of passengers at the Cebu South Bus Terminal waiting to board buses that will bring them to their hometowns for the All Saints’ Day and All Souls’ Day break (CDN PHOTO/JUNJIE MENDOZA).

As the exodus of thousands departing for their hometowns peaked today, local officials and law enforcement agencies are on high alert to watch over those heading out of Cebu as well as those who have started to troop to local cemeteries to visit their deceased loved ones.

In anticipation of the influx of people in bus terminals, ports and cemeteries for the All Saints’ Day and Souls’ Day celebration, collectively called “Kalag-kalag,” the Cebu City Police Office (CCPO) has positioned policemen in areas of convergence for maximum security.

Supt. Artemio Ricabo, CCPO deputy director for administration, said policemen are now stationed in all cemeteries and port and bus terminals. Police assistance desks are also in place to cater to the public.

“Our police personnel are roving every now and then in their assigned areas to ensure heightened security. We require them to send us situation reports every two hours so we can have real time updates from their areas,” Ricabo said by phone yesterday.

To maintain peace and order in cemeteries, police are also strictly enforcing the ban on alcoholic beverages and bladed weapons inside the cemetery premises. Before entering the cemetery, inspecting policemen require the visitors to leave any prohibited objects at the police desks and only claim them upon leaving the cemetery.

“We required all the police assistance desks to have a counter with a number-tagging system for visitors who will have to surrender prohibited items before entering the cemetery premises,” Ricabo said.

However, items used to clean tombs or clear plots of weeds like bolos are still allowed inside cemeteries or memorial parks. “These items are allowed as long as they are not too sharp,” said Ricabo.

He said the police have not monitored any security threats that could endanger the safety of the public but the police continued to be vigilant.

CSBT listed 913 bus trips and 41,000 passengers on Saturday and about the same number on Sunday, while those departing from CNBT was placed at about 20,000 on Sunday.

About 15,000 passengers have so far departed from Cebu City’s ports but more are expected to leave today to head to nearby provinces, such as Bohol, Cebu Ports Authority (CPA) officials said.

CSBT security management chief Joey Herrera said that despite the changes in the weather, passenger traffic at CSBT remained manageable. Even last Saturday evening’s heavy downpour did not affect the surge of the passengers, he added.

“The rains only drenched the grounds of the terminal wet, causing minor inconvenience to the passengers; but nevertheless, the passenger flow was normal. Had the rain poured earlier in the evening at, say, 7 p.m, it would’ve affected the passenger flow greatly,” Herrera told Cebu Daily News.

Herrera said the tents and portalets provided by the Cebu City government were adequate for the queues of passengers waiting to board when the heavy downpour occurred.

He said most of these passengers were bound for the Bato port in Santader, via Barili town.

Wellyn Rico, 22, a passenger queuing for the bus heading to Bato, observed that despite the surge of passengers in the terminal, it was more orderly compared to last year. “I find it more convenient this year because they have provided chairs for passengers waiting to board. Last year, I arrived here in the afternoon and was able to board at 7 p.m.,” Rico recalled.

Throngs of passengers were already thinning at 6 p.m. at the CNBT, said Clarisa Deniega, one of the terminal’s staff.

Most of CNBT’s passengers were headed to Daanbantayan, Kawit and Hagnaya and started flocking at the terminal at around 7 a.m. “Most of them waited for their ride for three to five hours,” Deniega said.

CNBT listed around 20,000 passengers who left the terminal as of 2 p.m. yesterday.
“Passengers only experienced inconvenience here last Saturday when the rain poured heavily at 11 p.m. It took most of the buses a very long time to return here and the passengers were accommodated at 3 a.m.,” Deniega told CDN.

With the expected rains in the coming days, the CPA also provided covered tents with seats outside the passenger terminals for passengers, Sarador said.

Security was also tight in all ports, with the CPA’s own security forces augmented by policemen.

Sarador encouraged passengers to report suspicious personalities in the ports. Manual inspection has been implemented in the ports, with X-Ray scanner and K9 units on standby, he added.

PCG personnel have also been strictly inspecting departing vessels to ensure there would be no overloading and have also been watching out for unregistered vessels.
PCG-Cebu Commander Agapito Bibat said colorum vessels are discouraged since they do not have insurance for the passengers and are not registered with PCG and the Maritime Industry Authority (Marina).

LTFRB-7 Assistant Regional Director Reynaldo Elnar said that drivers and operators will be fined P6,000 (under Joint Administrative Order (JAO) 2014-01) if they are caught overcharging their passengers.

“We have placed passengers assistance desk at all passenger terminals. We encourage passengers who experience overcharging to report to us,” Elnar told Cebu Daily News.

Elnar also warned the drivers and operators from overloading. “There should be no standing passengers especially those provincial buses that are plying out (of Cebu City),” Elnar added.

Overloading has the same penalty with overcharging, which is P6,000 for first offense. Third offense will lead to suspension of franchise.

In Cebu City, Councilor Dave Tumulak, the deputy mayor on police matters, said they have been on high alert since Saturday but no untoward incident was reported so far.

Tumulak said they expected the number of people visiting cemeteries to increase starting today and only up to Tuesday since Nov. 2 is no longer a holiday.

He said he visited the different cemeteries in the city yesterday and noted that police and military personnel are very visible within the vicinity together with barangay tanods.

“This is a huge factor that we have police visibility and that of the armed forces. Signages are also very visible. We are very happy that the city has been generally peaceful so far,” he added.

Smoking, like bladed weapon, is also prohibited inside cemeteries, Tumulak said.
He also urged the public to refrain from wearing expensive jewelry as well as bringing a lot of money when visiting the graves of their loved ones to avoid being victims of pickpockets.

“We are also encouraging everyone to clean up after themselves. We should avoid littering when we visit cemeteries,” he said.

“We will have site inspections of all cemeteries together with the police and the CCDRRMO. We will be counterchecking the system and the personnel and make last-minute adjustments if there is a need to do so,” he said.

He said first aid stations and ambulances are on standby in the cemeteries to immediately respond to medical emergencies.

Traffic flow was also rerouted starting yesterday in roads near cemeteries. The rerouting scheme will be in effect until November 2, according to Cebu City Transportation Office (CCTO) head Rafael Yap.

“Motorists are advised to follow the traffic signs installed in the affected streets to minimize traffic congestion,” Yap said in a statement.