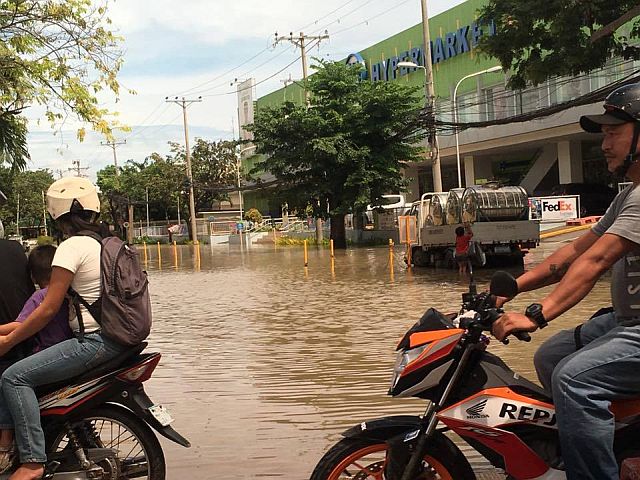 AN almost 12 hours of heavy rain last Saturday evening until early Sunday morning resulted in flooding in some parts of Metro Cebu.

Vhan Singson, weather specialist of Philippine Atmospheric, Geophysical and Astronomical Services Administration (Pagasa) Mactan said that the rain was caused by the Intertropical Convergence Zone (ITCZ), which affected Cebu and the rest of Visayas and Mindanao.

Singson said more rains are expected in Cebu in the next five days due to the ITCZ, which means that it will be wet for most parts of the day when thousands flock to cemeteries to commemorate Kalag-kalang, or the All Saints’ Day and All Souls’ Day on November 1 and 2.

Singson advised the public who are coming out for the Kalag-kalag commemoration not to stay long outside as rains are expected.

Alfredo Quiblat, chief of Pagasa Mactan, also said that aside from the ITCZ, a massive cloudiness in the Pacific Ocean has the possibility to develop into a low pressure area (LPA).

“We can’t say yet what specific day it will develop into LPA and too early to say whether it will enter the Philippine area of responsibility (PAR),” Quiblat, however, told Cebu Daily News.

ITCZ always brings rains since it is the breeding ground of weak LPAs that also bring thunderstorm activities like lightning, thunder, waterspout or whirlwinds.

November is expected to experience at least one to three typhoons, he said, mostly affecting Visayas and Mindanao because of northeast monsoon (Amihan).

In Cebu City, the heavy rain flooded some areas in Barangay Mabolo, particularly along North Reclamation Area at the streets surrounding the SM City Cebu mall complex past 9 p.m. Saturday before subsiding at dawn Sunday, and also along Colon Street in the downtown area.

No landslides or soil erosion incidents were also reported to the Cebu City Command Control Center.

“It was not extraordinary. The floods on Saturday were considered normal,” he said, adding that their office was monitoring reports coming in from the barangays during the downpour.

He said one factor could be that the rains didn’t fall heavily at once, sparing flood-prone areas in barangays like Mabolo and Kamputhaw.

Bañacia said firetrucks from Barangay Mabolo were deployed to Sitio Magtalisay, which is one of the most easily flooded areas in the city since it’s near the Mahiga Creek, in order to monitor water levels on Saturday evening.

“The Mabolo firetrucks are always on alert during rains. They went to the area. But they left and pulled out at around 10 p.m. since the situation there was normal,” he said.

In Mandaue City, flash floods were reported along A.S. Fortuna St. near the Cebu Rolling Hills Memorial Chapel in Barangay Tipolo and along M.C. Briones St., according to information posted on the city’s official Facebook page.

In Lapu-Lapu City, ankle-high flooding was reported along the Maximo Patalinghug Avenue at the vicinity of Barangay Basak early on Sunday but subsided in the afternoon of the same day.

Cebu Provincial Disaster Risk Reduction and Management Office (PDRRMO) head Baltazar Tribunalo Jr., said there were also no reported incidents all over the province resulting from the downpour.

Before the rain was experienced, a thunderstorm advisory was issued by Pagasa Mactan at 9 p.m. on Saturday.

Areas affected by thunderstorm were Lapu-Lapu City and Cordova, both on Mactan Island; and the mainland cities of Mandaue and Danao and towns of Consolacion, Lilo-an and Compostela, in the north; Asturias, Balamban and Toledo City in the west; Talisay City, Minglanilla and Naga in the south; and San Francisco town on Camotes Island.