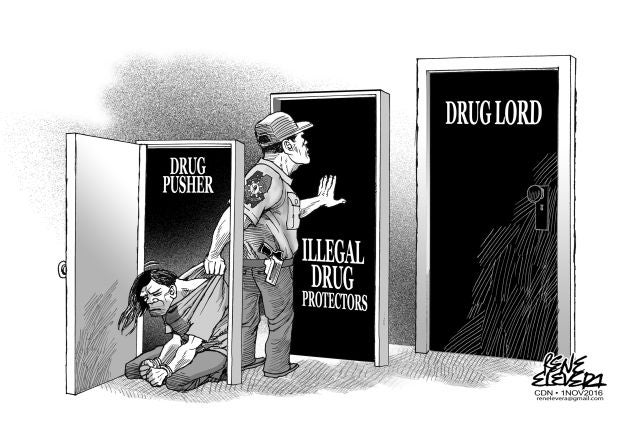 The arrests of a police officer and a musician/youth leader in a local Catholic Church in the past few days in Cebu City occurred amid the PNP’s announcement of a recalibration in their antidrug campaign by prioritizing big-name targets.

PO1 Gem Querubin and Jerome Sosmeña were caught in separate drug bust operations by the police, with Querubin being a surprise development since he wasn’t originally the target.

Sosmeña, while under surveillance for months, also caused quite a surprise not only because of the street value of the drugs seized from his possession but the fact that he was an active church youth leader and was known in his circle as a “good person.”

But then, even the seemingly innocent can get swayed by the lure and promise of quick, easy, big money, and both Querubin and Sosmeña appear to be the latest in a long and disturbingly growing line of people seduced by the power wielded by the illegal drugs trade.

Not even the continuing death toll appeared to deter the likes of Querubin and Sosmeña from selling and buying drugs or protecting drug dealers. If anything, the tightening noose may have made them more creative and drove them underground to escape the long arm of the law.

Police said Sosmeña required the police poseur buyers to produce evidence of their cash through Viber before considering to push through with their transaction then changed the original venue in order to evade police detection.

Even with the arrest, Sosmeña’s use of social media should tell the police to dig deep and do overtime work if they want to make good on their promise not only to catch the middle guys but also the “big fish” that the people expect the Duterte administration to place behind bars, not just let go with a threat to shoot them on sight if they are shown to cross the line.

Then again, even if they are behind bars, they’ve made quite the killing in profits by having their minions sell their drugs to the streets while they are safely ensconced in their “kobols,” which they’ve renovated with such luxuries as a jacuzzi and even a studio thanks to the willing cooperation of their jailers.

This corruption even within the penal system may have further justified President Rodrigo Duterte’s contention to revive the death penalty, which may draw strong opposition from the church and the liberals but will have ardent support from the public who may see it as a solution that can bring the fear of God into these amoral dealers.

This predicament aside, we hope that the police can do more than just rely on witness accounts to pinpoint and arrest the big fish involved in the illegal drugs trade.
We hope that the rest of the pillars of the country’s justice system make sure that the police deliver on their commitment and keep them locked up with no special treatment so they can rue and curse the day they chose to become criminals.

Read Next
2 killed in motorcycle mishap