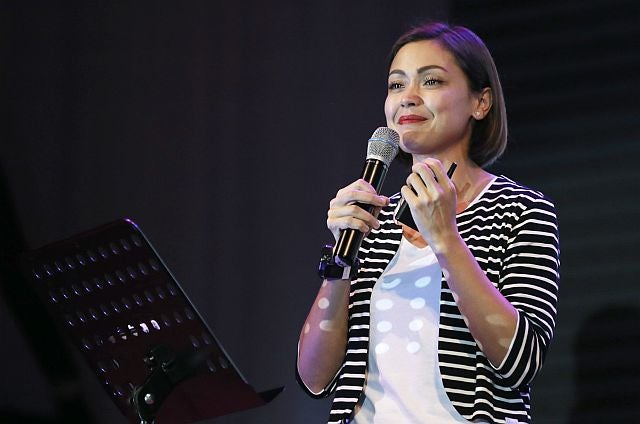 YEARS after separating from husband Panfilo Lacson Jr., Jodi Sta. Maria, 34, finally revealed the painful experiences she went through and admitted the addiction that suppressed her emotions. And despite the steady rise of her career in show business, the “Dear Other Self” main star defines fame and fortune as empty.

“Before becoming a workaholic, I became an alcoholic. I drank day and night. I even drank during tapings, ang gusto ko kasi masolusyunan ‘yung feeling ko of pain and emptiness. When alcohol wasn’t enough, I turned to drugs. I felt empty. I pretended to be okay when the truth is hindi naman talaga. I was in and out of bad relationships that left me all the more wounded and broken.”

She was married to Lacson for five years. The couple has a child, Panfilo III or “Thirdy,” now 10 years old.

According to Jodi, their immaturity was the root of their failed marriage, which affected their son. “I got married at the age of 22. The marriage lasted for five years. Siguro, inisip ko, nagpakasal kami at a very young age na we didn’t really know each other.

Instead of bringing out the best in each other, it brought out the worst in us.

At that point, we could not protect Thirdy from the chaos in the home, so we decided to separate.”

“While the annulment was ongoing, all the more that I felt lost and broken, alam nyo kung gaano ito ka-pangit na ilahad sa korte lahat ng detalye, simula ng mag-ligawan kayo, hanggang sa maging mag-boyfriend kayo, hanggang sa kinasal kayo, hanggang sa kung ano man ang nangyari kung bakit kayo naghiwalay. My life was such a mess na hindi ko na alam kung saan ako magsisimula. I needed attention. I needed acknowledgment. It even showed in the relationship I had with him. No matter how unhealthy and abusive, I stayed in the relationship because it felt okay, may nagmamahal sa akin at may nakakapansin.”

In 2010, veteran actor Connie Reyes invited Jodi to attend church, but it was only in 2014 that she obliged to go with her.

“Nahihiya na kasi ako, kasi ang tagal na niyang ini-invite ako, but there, dun ko nakilala ang Panginoon,” Jodi said. Then ‘Be Careful with My Heart’ came. This teleserye was a major turning point in my life because I had everything—because I found Jesus. I had a major concert abroad, sold-out, but backstage, I was crying. Fame and money were empty. There was nothing on top.”

Since becoming a Christian, she has already quit her vices—smoking, alcohol and drugs—in obedience to the sacred scriptures.

“I have a newfound respect for my body now, and I have to take care of it. Maayos itong ibinibigay sa akin ng Panginoon, maayos ko din itong isasauli sa kanya.”

Sta. Maria is nominated as Best Actress to the 2016 International Emmy Awards. She appeared in several soap operas such as the remake of “Pangako Sa ’Yo,” “Tabing Ilog,” “Noah,” and also in blockbusters “The Achy Breaky Hearts” and “All You Need is Pag-ibig.” She is now working on the film “Dear Other Self” which also stars Joseph Marco and JC De Vera.