Only a few came to Espinosa’s wake 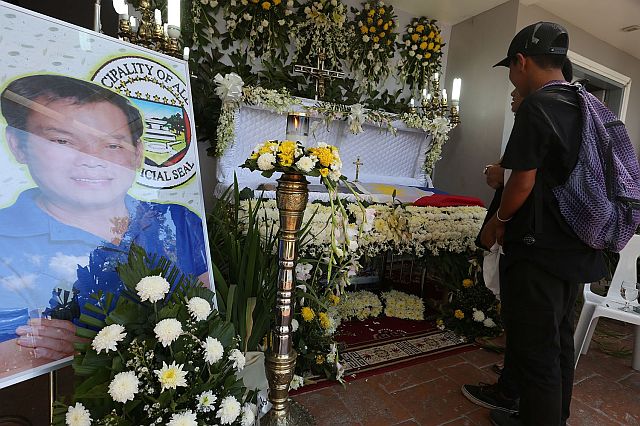 These two young men are among the very few who came to the wake of slain suspected drug personality Mayor Rolando Espinosa at his family’s mansion in Albuera, Leyte (INQUIRER PHOTO).

IT doesn’t look like a wake of a municipal mayor.

Only about 10 wreaths surround the white coffin displayed at the sprawling mansion’s porch that faced the gate of the 5,000-square-meter property in Sitio Tinago, Barangay Benolho, Albuera, Leyte.

It has been more than a week since his body was brought home, yet only a handful of mourners have gone to pay their respects to Mayor Rolando Espinosa Sr.

Not a single policeman from the Albuera Municipal Police Office, or even a barangay tanod (village watchman), was seen at the wake of the fallen chief executive whose son, Kerwin, was accused of heading the biggest illegal drug operation in Eastern Visayas.

Mariel, 18, the mayor’s daughter, said their gates have been kept open to anyone who wished to pay their last respects to her father since he was brought home on Nov. 6, a day after he was killed inside his detention cell in the sub-provincial jail in Baybay City, Leyte.

But only a few came.

Not a single mayor from other towns of Leyte sent a wreath to Espinosa who, the Criminal Investigation and Detection Group in Eastern Visayas (CIDG-8) claimed, was killed in a shootout.

The 10 wreaths that surrounded the coffin came from the Albuera village officials and department heads.

“That’s OK. We understand,” said Mariel when asked about the absence of flowers from officials of other local government units.

She said only a few came to pay their respects because either they were scared for their safety, or didn’t want to be associated with a family linked to illegal drugs.

But at the height of their popularity and power, nobody seemed to care about the family’s reputation even if it was an open secret in the town that Kerwin was involved in illegal drugs.

People used to flock to the Espinosa mansion on weekends when Espinosa, long before he was elected mayor in the May 2016 elections, would usually open his house to his neighbors for a feast, according to neighbors who wished not be identified.

When the party was over, the guests went home with P200 to P300 each. Local officials were among the guests of the Espinosas during parties or cockfight derbies held at the kiosks or tents inside the compound. But after the mayor’s fall from grace, a number of their friends distanced themselves from Espinosa, as shown by a handful of people who showed up in his wake.

A relative of the mayor, who asked not be named, said the police should have sent at least a security personnel in the wake since Espinosa had served as the town’s chief executive albeit briefly.

He said Chief Insp. Jovie Espenido, the Albuera police chief, had promised to deploy policemen to the wake but so far, none was sent.

“The family should not be asking for this. It should be given to us considering that he served Albuera as mayor although only briefly,” he added.
Those who came only had good words for the mayor.

Municipal administrator Jocelyn Bertulfo said the flag was flown half-mast outside the municipal hall to honor the mayor, who served the town for only about a month before he was linked to the drug operation of his son Kerwin and was subsequently held in police custody since August and later transferred to the sub-provincial jail in Baybay City, Leyte, where he was shot dead by CIDG policemen on Nov. 5.

“It’s a sign of giving him honor as a former mayor no matter how short-lived he served us,” Bertulfo said.

But for a 69-year-old resident, giving honor to a man who was seen to have condoned the illegal activities of his son was inappropriate.

“While he was entitled to be given honor since he was a mayor, we could not also deny that he was involved in illegal activity,” said the man, who declined to be identified.

But the Espinosa family was thankful to the few who came to pay their last respects. “We are grateful to them for coming,” said Mariel.

“He just kept on crying. He asked me to bring the cellphone to Daddy’s coffin. I guess he talked with him,” Mariel said.

She had no idea what Kerwin said to their father, she added. The two calls made by Kerwin, only lasted for two minutes each. The phone used by Kerwin was from a representative of the Philippine Embassy in Abu Dhabi.

Mariel said they are seeking justice for the murder of their father, as the family believed he did not die in a shootout but was executed, “I just don’t know if we can really achieve it,” she said.