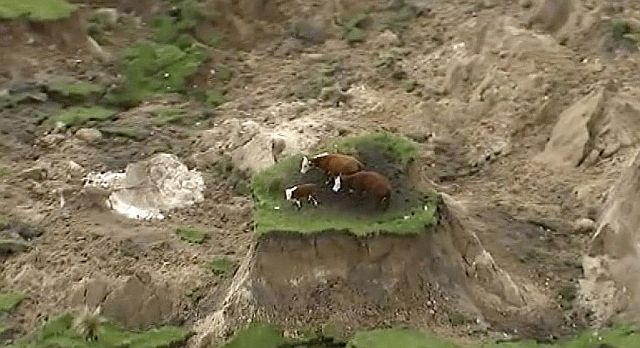 Three cows are stranded on an island of grass in a paddock that had been ripped apart following an earthquake near Kaikoura, New Zealand Monday (AP).

WELLINGTON, New Zealand— New Zealand Prime Minister John Key is traveling to the epicenter of Monday’s powerful earthquake to survey the damage. Key is taking a helicopter to the small South Island coastal town of Kaikoura. The town is a popular destination for tourists taking part in whale-watching expeditions.

Police said one person died in Kaikoura and another died in Mt. Lyford, a nearby ski resort. Police say they have also received reports that several people had suffered minor injuries in Kaikoura.

The Ministry of Civil Defence and Emergency Management reported that a tsunami wave struck at about 1:50 a.m. and warned residents living in low-lying areas anywhere along the country’s east coast to move to higher ground.

Prime Minister Key said at a news conference later Monday morning that the tsunami warnings were being downgraded to coastal warnings.

Key says at least two people were killed in the powerful earthquake that struck the country but he did not provide any further details at a news conference Monday morning in Wellington, the capital.

Authorities said they were not yet declaring a national emergency, saying the regions are coping well.

The magnitude 7.8 quake struck early Monday, just after midnight, 214 kilometers south of Wellington, where it collapsed a ferry loading ramp, broke windows and caused items to fall from shelves.

Authorities in New Zealand’s capital are urging people who work in the center of the city to stay home on Monday following a powerful earthquake.

Wellington City officials said some large buildings were showing signs of structural stress and that the quake would like have caused damage to some buildings.