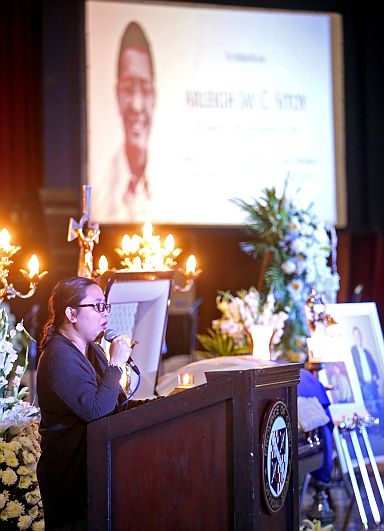 Lawyer Leighna Sitoy delivers a message during the necrological service for her late father at the Capitol Social Hall. (CDN PHOTO/LITO TECSON)

We will miss you, Daddy. Rest peacefully with the assurance that your efforts will not become futile.”

This was the message of the second eldest daughter of former Provincial Board (PB) member Arleigh Sitoy during his necrological service at the Social Hall of the Provincial Capitol yesterday morning.

Lawyer Leighna Katrina was sobbing while she delivered her message to her father in front of family, friends and her father’s former colleagues.

“There were sacrifices that we took as a family, like losing time with the family because of some other community affairs, and missing PTA (Parents-Teacher Association) meetings because of some relief operations for calamity victims that he had to attend to,” Leighna said.

“However, all in all, I am quite happy how my dad led our family by example through the changes he did in Cebu, in Cordova and for striving to accomplish his vision for the province up until his last breath,” she added.

Leighna said that when she was young, she could understand why her father would want to run for a public position. But now, she said she understands clearly that her father wanted to serve the public.

Leighna thanked the Cebu provincial government for paying last respects to her father and for arranging a eulogy service at the Capitol, where her father served for many years.

“Thank you very much to the province of Cebu for accepting Daddy, trusting him to lead and serve and allowing him to maximize the talents that God gave him one way or another despite his physical constraints,” Leighna said.

When Adelino’s turn to speak came, he remembered his son Arleigh as a very diligent person especially in his studies. Adelino said his son finished three doctorate degrees. “The reason why Arleigh wanted to keep on studying (is) because of the school allowance,” he enthused.

Adelino also admitted that before his son was hospitalized, they already patched up their differences that happened late last year. He then showed a slideshow of pictures of him and Arleigh working together.

Adelino said that his son was a fighter, adding that when Arleigh’s kidney was removed, the latter still managed to work and even preside meetings of the consultants in his office.

Davide admitted he was not close to Arleigh but considered him as a friend even if Arleigh, who used to be with the Liberal Party, opted for another political party, the PDP-Laban, during the last election.

Yesterday was the first Mass offering for Arleigh after he succumbed to pulmonary embolism in the afternoon of November 14 at the St. Luke’s Medical Center in Taguig City. He was 58.

After the Mass and necrological service, the remains of Arleigh were brought to the Cosmopolitan Memorial Chapel in Nivel Hills, Lahug, Cebu City.
Adelino said his son asked to be cremated before he died.

Arleigh’s remains will also be brought to the family’s home in Cordova town to allow people to pay their last respects before he will be cremated on Monday, November 21.

Adelino added that President Rodrigo Duterte might visit the wake of his son.