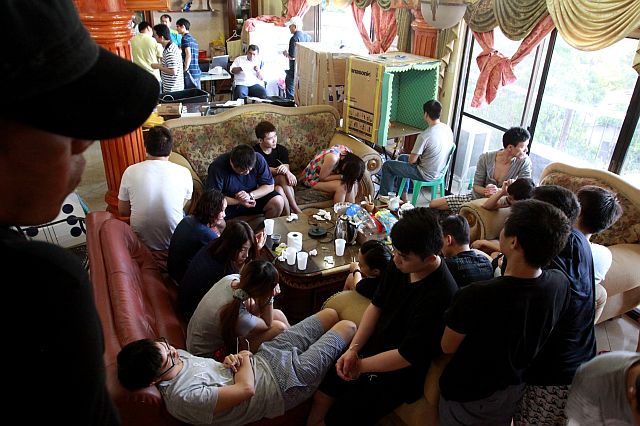 Twenty-four Taiwanese nationals were arrested by agents of the National
Bureau of Investigation in cooperation with the National Police Agency of Taipei City and the Taipei Economic and Cultural Office for alleged online extortion and fraud inside a rented house in a subdivision in Barangay Guadalupe(CDN PHOTO/JUNJIE MENDOZA).

Taiwanese nationals, allegedly operating an online extortion racket victimizing retired and active government officials in Taiwan, were raided by agents of the National Bureau of Investigation (NBI-7) at their hideout base inside a subdivision in Barangay Guadalupe, Cebu City.

Assisted by the National Police Agency of Taipei City and the Taipei Economic and Cultural Office, the NBI entered the five-storey house rented by the suspects inside Buena Hills Subdivision, at past noon yesterday, armed with a search warrant issued by Regional Trial Court Branch 16 presiding Judge Sylvia Paderanga.

Twenty-four Taiwanese were arrested, including five females. Six of them tried to jump off the windows to evade arrest but were unsuccessful.

The raid was a result of at least a month of surveillance inside the subdivision where the suspects were holed inside the multi-storey house they rented.

The Taipei Economic and Cultural Office sought the assistance of the NBI agents after receiving complaints from retired and active government officials of extortion and blackmail by the suspects, done through calls and through the internet.

The alleged online fraud operation was further validated when Taiwanese policemen transacted with the suspects who spoke Mandarin.

NBI-7 Special Investigator Arnel Pura said the suspects pretended to be government enforcers and chose their would-be victims carefully, mostly rich government officials whose wealth was more than their income.

“They (suspects) pretended to be police officers or prosecutors based in Taiwan. They chose whom to blackmail, and most of their victims have acquired wealth that is not commensurate to their known income,” he said.

They were asked to pay huge amounts of money to be deposited in certain accounts in exchange of their alleged silence.

“If their targets refused to pay them, these Taiwanese nationals threatened to file cases against the victims,” he added.

Seized during the raid were several computers, tablets, laptops, and mobile phones.

Inventory of the seized items was ongoing as of 6 p.m. yesterday.

Charges for violating Republic Act 10175 or the Cybercrime Prevention Act of 2012 will be filed against the suspects before the Cebu City Prosecutors’ Office, Pura said.

Pura said they conducted a one-month surveillance at the subdivision where the suspects rented a house reportedly owned by one Avelina Vidovic, a Cebuana who is married to an Australian.

A barangay councilor in Guadalupe was the one who identified Avelina as the house owner. She was, however, not in the premises when the raid was conducted. Authorities still have to verify whether Avelina Vidovic is in the country.

The tall steel fence of the house made it difficult for neighbors to notice the illegal operations of the suspects.

Inside were cubicles where the suspects transacted with Taiwanese officials.

“They (suspects) made it appear that they were just in Taiwan. Their victims did not know that they were transacting with persons who were in Cebu City,” Pura said.

When they validated the reports, the NBI-7 led by its director, Patricio Bernales, applied for a search warrant before the Regional Trial Court so that they can conduct a raid on the house rented by the suspects.

Judge Paderanga granted the application and immediately issued a search warrant to the NBI-7.

NBI-7 Supervising Agent Allan Tubi, acting head of the Regional Cybercrime Center in the Visayas, said the Taiwanese police interacted with the suspects who spoke Mandarin.

Tumulak, deputy mayor on police matters, was among at least 13 individuals who recently fell victim to automated teller machine (ATM) scams in Cebu.

He was thinking that the suspects could be connected to the ATM scam.

A man who looks like a foreigner is now being hunted by the police over his alleged involvement in the ATM scams.

But the 24 Taiwanese nationals arrested by the NBI-7 yesterday had nothing to do with the ATM scam.

“Wa man diay ni silay kalabutan sa ATM scam. (They have nothing to do with the ATM scam),” he told reporters.
He, nonetheless, urged Cebuanos to be on guard against all forms of scam.

“These Taiwanese nationals arrested by the NBI tried to deceive their fellow Taiwanese so they can gain money. Cebuanos, however, could also fall to the same trap,” Tumulak said.

He encouraged the public to assist law enforcers in arresting those who are involved in cybercrimes.

“If you notice suspicious or unusual activities in your place, immediately coordinate with the police,” he said.

In the past, Tumulak said law enforcers also arrested Koreans, Romanians, and Bulgarians who were allegedly involved in online fraud operations in Cebu.

“I do not know why they chose to operate in Cebu. Maybe, they thought we have lax security here. But they are wrong,” he said.

Read Next
Amputee off to Korea to claim award