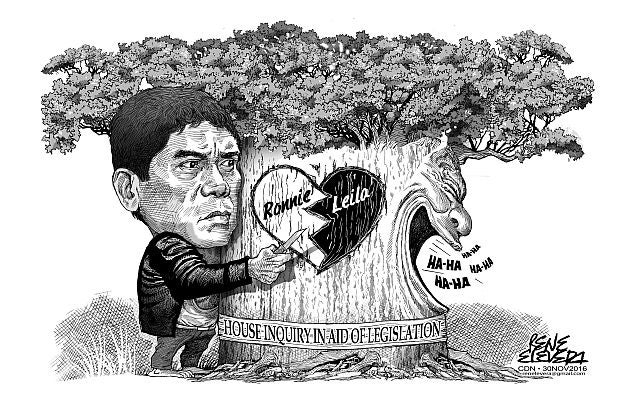 Last Thursday’s congressional interrogation of Ronnie Dayan, while somewhat instructive, is known more for its attempts by lawmakers to ferret out the salacious details of his seven-year affair with Sen. Leila de Lima rather than verifying whether or not she is indeed a drug lord coddler and recipient of drug money.

At least that’s how it appeared to those who watched the live broadcast of the congressional hearing which drew laughter and some measure of entertainment to those who consider it as yet another cheap attempt by allies of the Duterte administration to further debase and destroy De Lima, one of the very few who is speaking out against the extrajudicial killings of drug suspects.

At the very least, we do know that there are some boundaries that Congress dare not cross in order to not offend public sensibilities such as their eventual refusal to publicly broadcast the alleged sex video featuring Dayan and De Lima, which may have sparked their line of provocative questioning last Thursday.

Since he had no other choice but to play along, Dayan obliged by describing his love for the former justice secretary turned senator which either irked, titillated or made people squirm in discomfort whichever their preference.

People ask if there was anything substantial with what Dayan said that would prove that the senator benefited from the alleged drug money payoffs that he received which were supposedly used to finance her campaign.

It had been said that Dayan was not in De Lima’s employ by the time he met with suspected drug trafficker Kerwin Espinosa last year. Nor was there any evidence shown by Dayan to prove that he facilitated the senator’s meeting and later photo op with Espinosa.

Then again, it’s hard to prove any of this without a paper trail. What we only have is Dayan’s say-so, which would be hard to reconcile with Espinosa’s testimony.

The son of slain Albuera Mayor Rolando Espinosa Sr. remains in protective custody for pinpointing a lot of top officials he implicated in the drug protection trade, including Daanbantayan Mayor Vicente Loot and several police officers formerly assigned in Cebu.

If anything, Dayan’s testimony is yet another kitchen sink thrown De Lima’s way by President Rodrigo Duterte, who vowed “to destroy her” for continuing to hold him accountable for the many deaths of drug suspects that occurred during his Davao City mayor days and is now continuing at a frenetic pace in the first six months of his presidency.

Read Next
The dream of a benevolent dictator