CARRETA FIRE VICTIMS ASK: Where do we go? 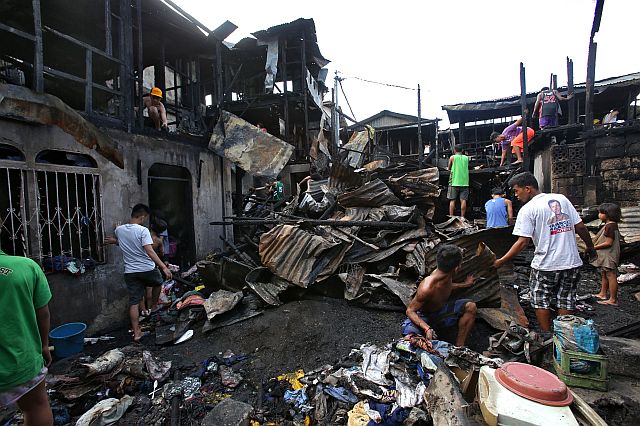 CARRETA AFTER FIRE/NOV. 29, 2016: Fire victims in barangay Carreta try to look for some of useful belongings after the fire last monday afternoon, Most of the fire victims were temporary relocated in Carreta Elementary School. (CDN PHOTO/JUNJIE MENDOZA)

About 300 victims of a fire which struck Sitio Ponce I, Barangay Carreta, on Monday may have no place to go beginning Sunday, December 4, as they have outlived their welcome in classrooms which had served as their temporary evacuation center while clearing operations at the fire site are still underway.

“We should also consider that the students needed the classrooms as much as the victims,” Paz Reflos of the city’s Department of Social Welfare Services (DSWS) told Cebu Daily News.

After Monday’s fire, more than 50 victims packed each of the five classrooms at the Carreta Elementary School which were offered as their temporary shelter as continuous rains poured over Metro Cebu.

While the fire victims camped in the classrooms, the students were cramped into other rooms divided into two to accommodate different lecture sessions.

As the evacuees were given only up to today to find another place for shelter, DSWS arranged the temporary use of the barangay’s sports complex.

“Fortunately, officials of Barangay Carreta agreed to transfer them to their sports complex, and they will be given until Sunday (December 4) to stay there,” Reflos said.

The sports complex is located just a few meters behind Carreta Elementary School.

As of yesterday afternoon, clearing operations were still being conducted at the fire scene with several displaced families expressing hesitation on setting up temporary shelters there because of hazardous debris such as rusted tin roofs and partially burned, sharp-edged wooden planks.

Jessie Malapit, one of the victims who works as an electronics supervisor, said that they will make the most of the temporary shelter provided to them since it will be for a limited time only.

“We sleep like we’re sardines in a can, but that’s better than being out there with nowhere to sleep,” he said in Cebuano.
Malapit, 40, said that so far, the aide they received from the Cebu City government were the daily rations of food consisting of three meals per day.

Donations from private individuals and organizations also began to arrive yesterday, he said.

“We can just buy food for ourselves but rebuilding our shelters, that’s what we really need now especially that we will resume our jobs. So, where will we retire for the day?” wondered Malapit.

The city’s DSWS has set the distribution of tin roofs, canvasses (locally known as trapal) and plywood to the fire victims today so that they could start rebuilding their homes.
The city’s food ration will also end today.