Marcos burial at the LNMB a revision of history 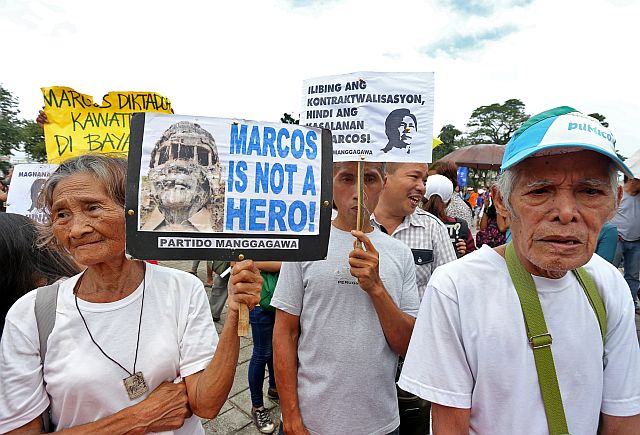 A group of elderly brings their placards as they join the Anti-Marcos rally at Plaza Independencia, remembering their experiences during the Marcos years. (CDN PHOTO/JUNJIE MENDOZA).

THIS is a revision of history. When a dictator who was ousted by People Power will be buried in the Libingan ng mga Bayani, we are made a laughing stock in the entire world. Only in the Philippines.”

This statement coming from lawyer Democrito Barcenas during yesterday’s protest rally and commemoration of the birth anniversary of Andres Bonifacio was followed by a statement of hope that the new generation would be living heroes emulating the fallen hero.

“Yes, the fact that this Anti-Marcos demonstrations are led by millennials, we see hope in this generation that there are still living heroes especially the millennials who still have the spirit of Bonifacio in fighting justice and oppression,” said Barcenas.

Working students of Saint Theresa’s College (STC) May Sunshine Sastre and Lovely Abadilla who participated in yesterday’s rally said that there are still Bonifacios in today’s youth, but very few.

“Yes, pero maihap lang gyod. like those people who participated in the rally today (yesterday). At least naa. It should be on the education system especially in social studies classes to help inform the young ones about the history,” they said.

“Andres Bonifacio is a hero but Ferdinand Marcos is not and will never be,” Akbayan Partylist Representative and guest speaker Tomasito Villarin said during the rally at Plaza Independencia.

He encouraged the youth to continue seeking for the truth and to fight for their rights by joining protests, in the same way that Andres Bonifacio gathered people to fight for freedom.

“The youth now has access to information and whatever books they need. My only advice is continue to study and look for the truth, not just gloss over history,” he said.

Bonifacio’s death also served as an awakening for people to continue what he started, he added.

“Leaders come and go but ideas are important to be passed on,” Villarin added.

But Bantayan National High School student Sean Raymond Solitario said that majority of teenagers are too busy with their own lives and do not care about history.

“No. Majority don’t really care about the history of the Philippines. They don’t even respect our anthem when it’s on. So basically when you ask them about him, (Bonifacio) their answer is very broad. They will just say he was a hero in general because they don’t want to waste their time digging info about what he accomplished before,” Solitario said.

Barcenas and Villarin were among the speakers in yesterday’s protest rally against the burial of ousted dictator Ferdinand Marcos at the Libingan ng mga Bayani (LNMB), which also coincided with the commemoration of Bonifacio’s birth anniversary.

Barcenas said he was “shocked, saddened and outraged” upon learning of the burial of Marcos at the LNMB.

Barcenas, of the Free Legal Assistance Group (FLAG) said that he was detained for three months at Camp Sergio Osmeña for representing the activists who rose up against the Marcos regime.

However, Barcenas believes that all hope is not lost for the country as he sees a living Bonifacio in the youth.

On the other hand, Villarin said about 44 years ago, he and his group were abused and beaten up by the police, who used bats, water cannons and tear gas, when they joined rallies and protests opposing the Marcos rule.

“We mobilized because we needed to protest, because at that time you really need to get your voice out and the only way was to demonstrate on streets,” Villarin said.

“We had small group discussion, teach-ins sa parks, (and) open spaces so we can conduct education sessions with others,” he added./ USJ-R Interns Thea Verona N. Oliverio and John Carlo A. Villaruel

Read Next
Corruption: A Marcos ‘legacy’