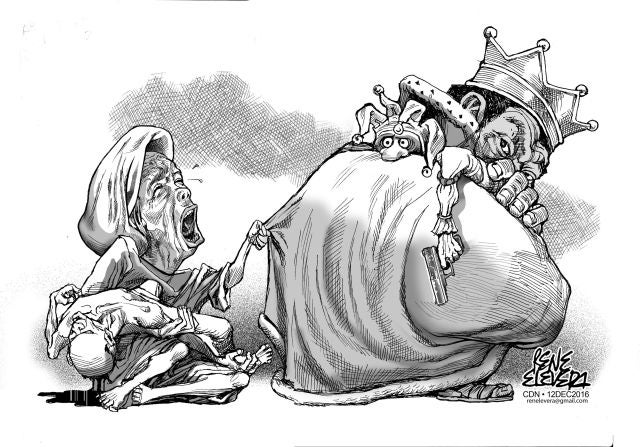 What to do when the people you’re prosecuting is being protected by the president of the republic?

That predicament facing the Commission on Human Rights (CHR) is now being shared by the National Bureau of Investigation (NBI) which disclosed its initial findings showing that Supt. Marvin Marcos, along with several Criminal Investigation and Detection Group (CIDG) agents, was responsible for the killing of Albuera mayor Rolando Espinosa Sr. inside a detention cell.

Despite the congressional hearings on the alleged rubout which turned up empty, the NBI managed to gather some evidence disproving the claim of these officers that Espinosa confronted and engaged them in a shootout, leaving them with no other choice but to take him out.

News of Espinosa’s death inside his cell may have shocked a lot of Filipinos, but only the most naive would believe that the mayor indeed put up a fight inside his cell, with all those agents inside and no jail personnel accompanying them as witnesses.

A key fact that convinced the NBI and others of a rubout came from the confession of one of the jail personnel who said the CIDG agents prohibited them from going with them inside Espinosa’s cell for no apparent reason.

That and the security camera was turned off could only mean that the mayor won’t live to see another day.

Their suspicions were bolstered with forensic findings that showed the gun supposedly used by Espinosa was planted by one of the CIDG agents.

There were denials, but curiously if the CIDG agents did indeed kill Espinosa, they could have done a better job of hiding the evidence. As it is, the nameless vigilantes who pick off drug suspects in drive by motorcycle shootings are covering their tracks better.

That said, both the NBI and the CHR are facing a tough climb when President Duterte publicly declared his support of Marcos and his men, despite the strong evidence against them.

President Duterte’s promise to protect the cops who are waging a relentless war against illegal drugs could only stoke public sentiment either in favor of, or against, his administration; but the current mood is one of support.

And that’s the other half of the equation that both the CHR, the NBI and those appalled by the wanton violence that erupted even before Duterte assumed the presidency should recognize and try to resolve if they ever hope to stop the killings committed with abandon and, not a few suspect, with the silent approval of the powers that be.

Those who believe in due process should first win public support and persuade the majority of Filipinos that there is another, better way to wage war on drug traffickers and their protectors.

Read Next
Miracles and peace with earth