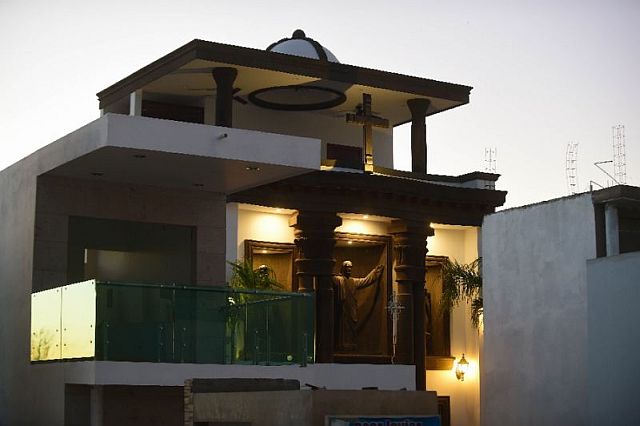 CULIACAN, Mexico — Some drug lords take their ostentatious lifestyle literally to the grave: a cemetery in Mexico is blooming with two-story tombs fitted with living rooms, air-conditioning and bulletproof glass.

Mexico marked on Sunday 10 years since the government deployed troops in a drug war that has killed tens of thousands of people, with many victims buried unceremoniously in mass graves, dumped on roadsides or left hanging on bridges.

But the drug barons of Sinaloa state, the northwestern bastion of imprisoned kingpin Joaquin “El Chapo” Guzman, have given themselves more dignified final resting places at Jardines del Humaya cemetery in the regional capital, Culiacan.

One crypt looks like a chapel with white columns, angels on stained glass windows and a statue of Jesus Christ standing on the roof.

Others resemble small modern apartments with glass doors, stairs leading to a second floor and living rooms with couches for mourners. At least two of them were adorned with Christmas trees.

A crypt said to hold the remains of a Sinaloa drug cartel hit man has a bulletproof glass door, a cross that lights up in the dark on top of a dome, and surveillance cameras pointing toward the entrance. Inside, a glass case holds four small swords.

As night falls, lights are automatically activated outside several tombs. Many have alarm systems. One has fort-like towers, and another has a roof terrace with fans.

Most crypts have large pictures or paintings of the deceased on the wall – several look like young men in their 20s or 30s – but many of these tombs have no name to identify the person.

“It’s an expression of the power that they once had and a manifestation of their desire for eternity, which is natural in any human being,” said Juan Carlos Ayala, a philosophy professor at the Autonomous University of Sinaloa who specializes in “narco culture.”

“It’s also a demonstration for those who survive them that this man was important,” Ayala said.