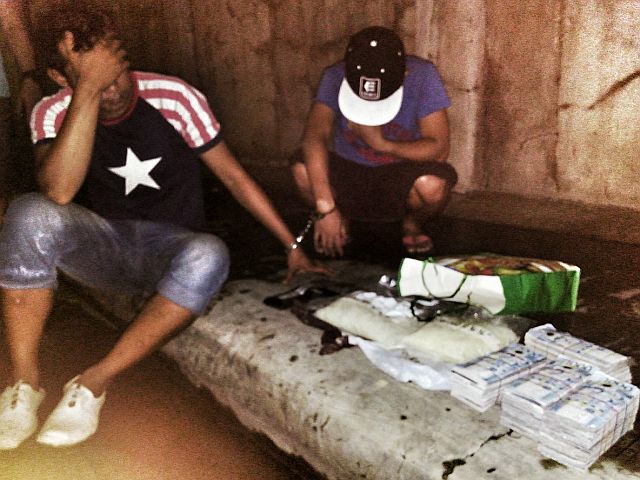 Upon giving the “gift” to the recipient along Sixth Street at the North Reclamation Area in Cebu City at around 6 p.m. on Friday, Roljoy Rosette, 33; and Joshel Delfin de Jesus, 28, were immediately arrested by a group of policemen (CIDG PHOTO).

Wanting to have money for Christmas, two men agreed to deliver a paper bag whose contents they claimed they did not know.
Upon giving the “gift” to the recipient along 6th Street at the North Reclamation Area in Cebu City at around 6 p.m. yesterday, Roljoy Rosette, 33, and Joshel Delfin de Jesus, 28, were immediately arrested by a group of policemen.

They had no idea they were transacting with an undercover policeman.

Inside the Christmas paper bag were two large packs of shabu (methamphetamine) weighing two and a half kilos worth P29.5 million based on the Dangerous Drugs Board valuation, said Supt. Fermin Armendarez, deputy chief of the Criminal Investigation and Detection Group in Central Visayas (CIDG-7).

The arrest of the two men came just hours after police also seized P2.4 million worth of shabu in separate operations in the cities of Cebu and Mandaue.

The CIDG-7 official said that the arrest of Rosette and De Jesus only proved that there are still individuals who continue to peddle shabu despite the government’s relentless campaign against illegal drugs.

“That has been their source of income. They will really find a way to continue their operations especially that Christmas is approaching,” Armendarez said.

At around noon yesterday, CIDG-7 agents also nabbed two women with P2.3 million worth of shabu in a drug bust in Barangay Mabolo, Cebu City. The suspects were identified as Josephine Alfante and Shieralace Ylaya, who will face charges for selling prohibited drugs, a non-bailable offense.

In Mandaue City, Cresenciano Gerana, 39, tagged as a high-value target drug personality in the city, was arrested at dawn by the police at a checkpoint in Barangay Cubacub.

Gerana, of Barangay Tawason, Mandaue City, was driving a motorcycle when he was flagged down by the elements of the Canduman Police station manning the checkpoint.

Gerana attempted to make a U-turn when he saw the checkpoint, but he was stopped by the policemen who, after frisking Gerana, found tucked in his waist a .45 caliber pistol with eight live bullets and a pack of shabu valued at P100,000.

Gerana also violated traffic laws for not wearing a helmet and driving without a license.

Police learned that Gerana was one of their target personalities who was able to escape during a drug bust in Barangay Cubacub several months ago.

According to Chief Insp. Aldrin Villacampa, chief of the Canduman police, Gerana has pending cases for murder and carnapping and an illegal drugs rap.

Charges for violating Republic Act 9165 or the Comprehensive Dangerous Drugs Act of 2002, particularly for selling illegal drugs, will meanwhile be filed against Rosette and De Jesus before the Cebu City Prosecutor’s Office next week. The offense is non-bailable.

The shabu hauls over the last 24 hours would now bring to over P100 million, the amount of drugs seized in Central Visayas in just six months.

Based on the records of the Police Regional Office in Central Visayas (PRO-7), the police have confiscated a total of P99.1 million worth of shabu in the region from July 1 to December 1.

He claimed that one of his male passengers requested him to deliver the paper bag to another man who would pick it up at 6th Street in Barangay Carreta, Cebu City.

The passenger, he said, promised to give him P1,000 when he returned.

“Nakahibawo pa lang ko nga shabu diay to, dili gyud ko mohatud ato uy. Wala gyud ko nahibaw unsay sulod ato. (Had I known that the paper bag contained shabu, I would not have agreed to deliver it. I really had no idea what its content was),” said Rosette, a resident of Barangay Quiot in Cebu City.

Rosette said he could remember the face of his passenger but did not know the latter’s name.

He said he was given P250 as taxi fare. Rosette said he requested his friend De Jesus, a construction worker, to accompany him in delivering the paper bag.

When they arrived in the area, they gave the paper bag to a man who in turn gave them another paper bag that was supposed to contained P2 million in P1,000 bills but which actually only had P4,000 in real bills that were used as cover for cut up paper bills.

Rosette and De Jesus were then arrested.

De Jesus, on the other hand, claimed he only agreed to accompany Rosette, hoping that he too would get P1,000 from the man who asked his friend to deliver the paper bag.

“Maayo na lang nga duna mi magamit karong Pasko. (We could use the money this Christmas),” he said.

Like Rosette, De Jesus claimed he did not have any idea that the paper bag they delivered contained illegal drugs.

But Armendarez was not buying the claims of Rosette and De Jesus, as he believed the two were drug pushers and not just one-time drug couriers.

He said the police work to get the persons behind the latest seized drug actually began four months ago when they received an information about a group of people who were selling large amounts of shabu.

He said CIDG-7 agents transacted with the drug dealers by phone, but the latter allegedly refused to deal with them early on.

“They were very elusive. But we did not give up until they finally gave in to our request at around 2 p.m. today (Friday),” Armendarez said.

He said they were trying to find out if Rosette and De Jesus were the ones the police transacted with, or if it was another person who was supplying drugs to the two men.

“We also would want to know if it were really them whom we talk to before the operation,” Armendarez said.

Rosette and De Jesus are currently detained at the CIDG-7 stockade.

The PRO-7 record showed that on top of the P99.1 million worth of shabu seized in the region from July 1 to Dec. 1, at least 4,306 drug suspects were also arrested in various police operations while 91,856 drug dependents and peddlers have surrendered to authorities over the same period.

A total of 149 drug suspects were killed in police operations while 219 were gunned down by unknown assailants also in the last six months.