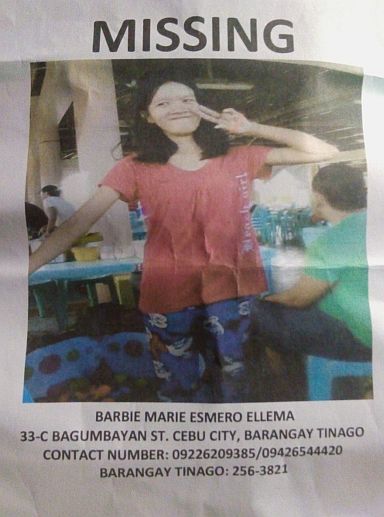 A flyer distributed by the family of Barbie (CDN PHOTO/JUNJIE MENDOZA).

A special needs woman has been reported missing by her family when she did not return home from attending a Christmas eve Mass.

Barbie Marie Esmero Ellema, 30, was last seen on Sunday, Christmas Day, along the Metro Gaisano Colon area wearing a green headband, blue blouse with a letter J printed at the center, blue leggings with printed white flowers, and black beaded sandals after failing to come home since 8 p.m. of Dec. 24.

According to her uncle, Joseph Esmero, Barbie was alone when she left their residence at 33-C Bagumbayan Street, Barangay Tinago, Cebu City.

Although usually accompanied by members of the family, Barbie had dressed up and gone out without telling anybody where she was going. However, Esmero’s neighbors saw Barbie attending Christmas Eve Mass at the Cebu Metropolitan Cathedral with them.

Esmero said he did not notice that his niece was missing until after he got home at around 4 a.m. of Christmas day from an activity held at their sitio.

The footage of the CCTV owned by Barangay Tinago located in Zulueta Street showed Barbie walking to the Cebu Metropolitan Cathedral around 8:29 p.m.

Esmero said that Cobinban said that Barbie even smiled at her after she went to greet her.

Aside from what she was wearing, Barbie may also be identified by a slight deformation around her left eye and missing front teeth.

Flyers have been handed out by Ellema family in the different police stations located in the downtown area of the city.