Capitol ready to extend aid to typhoon victims in Luzon 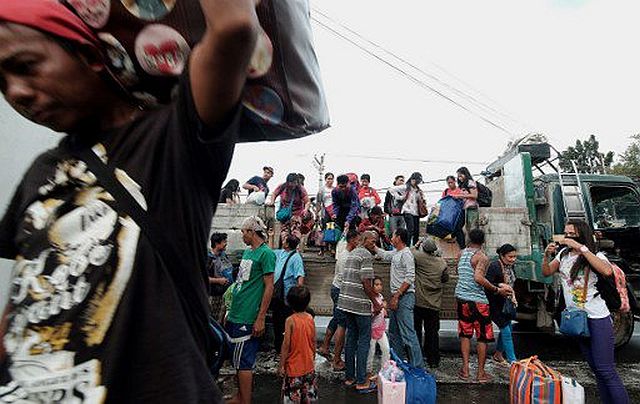 Stranded passengers from Tabaco port are evacuated by the local government in Tabaco City, Albay province on December 24, 2016 after their seafaring vessels were prohibited from sailing ahead of typhoon Nock-Ten’s expected arrival. (AFP)

The Cebu provincial government is ready to extend relief assistance to storm-ravaged areas in Luzon, a Capitol official said.

Baltazar Tribunalo Jr., head of the Cebu Provincial Disaster Risk Reduction and Management Office (PDRRMO), said they are ready to send help should the need arise.

“For now, we just have to look at the capacity of (those in) the north. Like Cebu, they have their respective budgets. We respect the capacity of each province. The national (disaster council) is also there to help,” he told Cebu Daily News in a phone interview yesterday.

According to the Office of Civil Defense (OCD), more than 218,000 people have been evacuated from their homes while 48 domestic and international flights were cancelled in the wake of typhoon Niña (international name: Nock-Ten) which made landfall in Catanduanes on Sunday, Christmas Day.

Mary Ann Dimabayao, information officer of Mactan-Cebu International Airport (MCIA), said three flights from Cebu to Manila were cancelled yesterday due to the typhoon. These are Cebu Pacific flights 5J 553 and 5J 567 as well as AirAsia flight Z2 775, she said.

No casualties have been reported so far.

Bicol felt the brunt of the storm last Sunday with electricity intentionally cut off in the region to prevent residents from accidentally getting electrocuted if power lines are knocked down. The storm also affected the country’s capital, Manila, and the surrounding area yesterday before exiting the main island of Luzon later in the afternoon, according to state weather bureau Pag-asa.

Meanwhile, the OCD in Central Visayas also sent a team to Luzon to help in response efforts of the national government.
Tribunalo said his office will have to wait for a report on the rapid damage assessment of affected areas before making a move.

“If we find that what happened was really overwhelming and the extent of damage was great, we will have a meeting with provincial government officials. I will have to consult this with the governor, vice governor, and (disaster) council members,” he said.

CDN sought Gov. Hilario Davide III and Vice Governor Agnes Magpale for comment, but did not get any response.

Provincial Board (PB) Member Christopher Baricuatro, chairman of the legislative committee on public health and social services, said the Capitol has enough disaster funds to spare for typhoon victims in Luzon.

“I think we still have enough in our calamity fund. The PDRRMO first has to assess any damage in the province (Cebu). After that, I will recommend to the governor to extend whatever assistance we can spare to help victims in Luzon. After all, this is the season of giving,” he said in a text message.

Tribunalo said the provincial government still has around P9 million to P10 million in its Quick Response Fund (QRF) while a resolution from the PDRRM Council allows the Capitol to draw resources from the disaster preparedness fund if the former source runs short.

At present, he said the Capitol’s disaster preparedness fund is still between P30 million to P40 million.

Meanwhile, the Cebu City Disaster Risk Reduction Management Council (CDRRMC) is waiting on the deliberation of the Cebu City Council on whether or not to provide relief goods to the affected individuals in the Bicol region.

In a phone interview, CDRRMC Chief Harold Alcontin said that as of yesterday, they have not received any instructions to dispatch relief goods.

“We’re also monitoring the situation there (Bicol region) to assess what type of assistance we can give them,” added Alcontin in Cebuano.

He also said that their office is expecting to have the matter discussed by the city council today.