When Manny Pacquiao stepped out in front of inmates of the Cebu provincial jail, he made a confession.

“Nakasuway pud ko nga mapriso didto sa Manila City Jail. (I too experienced life behind bars),” he said.
For 15 minutes, the world-renowned boxing icon talked about his “old life” of excess, something in the not too distant past.

Over 1,800 inmates who cheered his name from the quadrangle below and received him like a hero, listened intently as Pacquiao the champion spoke in Bisaya, sounding more like a pastor than a sports demigod. 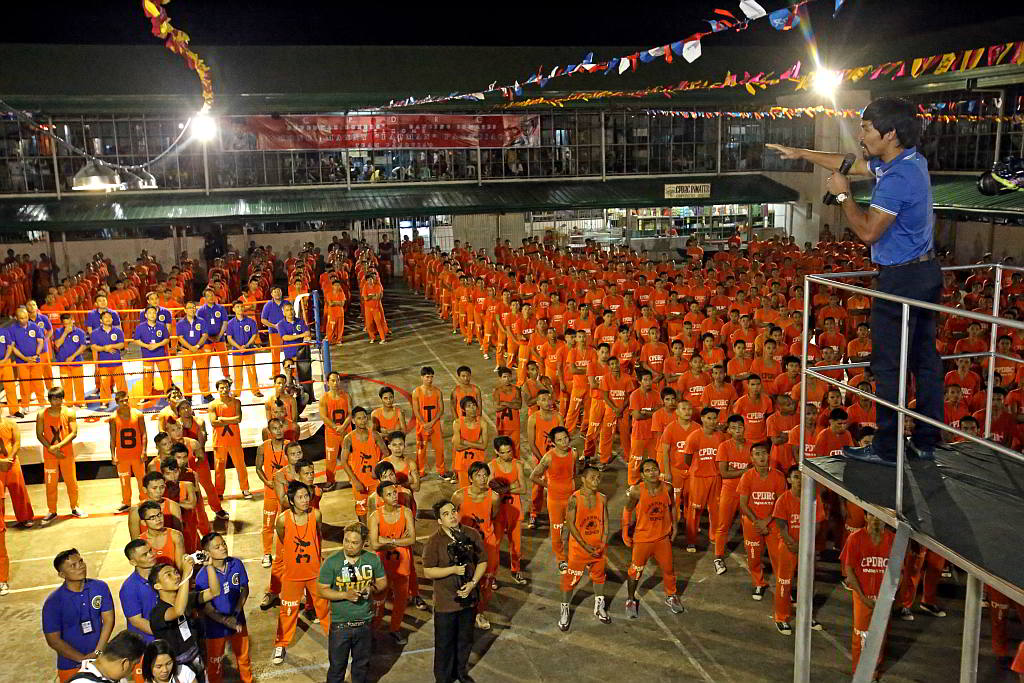 All eyes and ears of the Cebu provincial jail’s 1,800 inmates focus on visiting Filipino boxing champion Manny Pacquiao, who gives words of inspiration after watching dance performances and a boxing exhibition by the inmates.
(CDN PHOTO/JUNJIE MENDOZA)

He encouraged them to read the Bible everyday and deepen their relationship with God.

The boxing superstar and congressman of Saragani province visited the jail in barangay Kalunasan, Cebu City late afternoon yesterday to watch the inmates do their world-famous choreographed prison dance routines and a boxing exhibition of three pairs of inmates.

The inmates, who gained worldwide fame through YouTube in 2007 with their choreographed dance to Michael Jackson’s “Beat It”, honored Pacquiao with an opening dance number with boxing gloves and head gear, throwing punches in the air.

They performed three dance routines to the pop songs “Jump”, “Di Ko Mapigil” and Michael Jackson’s “They Don’t Really Care About Us”.
They also sang three praise songs “This Is My Desire”, “Sinasamba Kita and the hit song associated with the Champ, “ Para Sa ‘Yo ang Laban na Ito”.

Pacquiao told inmates to change their ways and trust everything to “the Lord”, the way he did at age 35.

His appeal was also closely watched for cues on whether he was using a Catholic orientiation, his original roots, or his newer association with a born-again Christan group, a private matter that became a controversy when his mother openly lamented that he had drifted from his childhood beliefs.

Pacquiao didn’t make the sign of the cross, wear a crucifix or refer to the Sto. Niño or Holy Child whose fiesta was just celebated in Cebu City with mammoth crowds of over 2 million in religious processions and a grand Sinulog parade.

It didn’t seem to matter to the inmates. They hung on to Pacquiao’s words and kept their eyes on the champion who gestured to them from a catwalk.

All I want is that after this life, I will still see all of you in heaven),” he added.
In Cebuano, Pacquiao said “I’m not introducing any religion here. I here to talk about deepening one’s relationship with God.”

At one point while praying aloud for the inmates, Pacquiao cried and asked the Lord to bless them.When his testimonial ended, the imates all followed his request to shout out loud “Alleluia!”

Interviewed later, Pacquiao said he intends to give more boxing equipment to the CPDRC for inmates who have been training in boxing. There are 47 members of the CPDRC SuperMax a boxing group. A boxing ring in the middle of the quadrangle was used by three pairs in an exhibition match.

Before the match, inmates sang “Para Sa’yo and Laban Na To,” a song associated with Pacquiao.

Vince Rosales, the choreographer, said the visit was a big morale booster.

“We’re very happy. The dancing inmates, the world’s number one, and the number one boxer met in one venue,” he told reporters.
Rosales said the CPDRC’s new “boxing performances” are still part of the inmates’ rehabilitation program.

“We want to teach them to let go of hatred and learn the value of sportsmanship.”