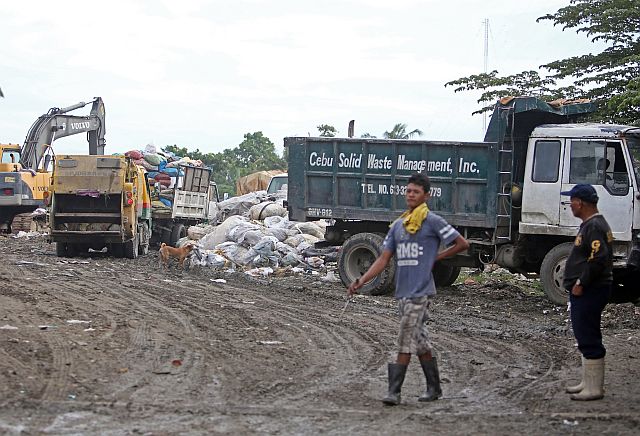 A garbage truck from a Cebu City barangay dumps trash in a private lot near Inayawan. (CDN PHOTO/LITO TECSON)

In order to haul the remaining garbage from the temporary transfer station at the South Road Properties (SRP) to a final dumping site, the Cebu City government is proposing another emergency procurement. The City Council is expected to hold a special session today upon the request of Mayor Tomas Osmeña that he be authorized to spend P120 million to hire another service provider to bring the city’s garbage to a final dumpsite.

But unlike the previous emergency procurement last December, an additional requirement was inserted by the Bids and Awards Committee (BAC) for interested parties — that they should have their own transfer station, according to BAC Chairman Ronaldo Malacora.

“For the second procurement, we have included a requirement for the service provider to also provide a transfer station. The approved budget cost will still be the same, which is P1,400 per ton,” Malacora told Cebu Daily News.

“That (amount) is more than enough,” Osmeña told reporters.

“As soon as I shall have received the request, I will act accordingly. We have to look at the request and read it first. Offhand, I think there is nothing wrong with the mayor’s plan. After all, all actions undertaken by the executive should have the approval of the City Council,” he said.

Osmeña called for today’s special session because the first regular council session is not scheduled until January 10.

Cebu City Councilor Joel Garganera, head of the committee on environment, said he will listen to the mayor’s proposal during the special session.

But Garganera believes that the previous hauler, Jomara Konstruckt Corp., should be allowed to continue hauling the city’s garbage. This is the company that had begun removing the garbage from the temporary transfer station from December 27 until December 31, when their contract with the city expired.

“What the present service provider has started, if they could comply with the volume that they are supposed to clear, then that’s it. Let us not be so technical about the dates,” he said.

The City Council earlier approved the use of a P9.2-million budget from savings in previous years to fund the city’s plan for the emergency procurement of a private hauler.

Based on the Purchase Order signed by Mayor Osmeña and Jomara, the entire budget was good for a total of 6,600 tons of garbage at Jomara’s quote of P1,375 per ton. However, the same Purchase Order also specified that Jomara can only demand for payment based on how much they actually dumped to a landfill from the period of their initial contract from December 27 to 31.

“The special session was done in December 23. The contractor received the PO on December 27. How can they finish everything? Is he (Osmeña) really sincere in addressing the garbage problem? Mura man ug iyang gipiit ang contractor (It’s like he is pressuring the contractor),” Garganera said.

Department of Public Services (DPS) chief Roberto Cabarrubias said that he does not know how much garbage Jomara was able to dump. “We are still waiting for them (Jomara). They will present to us documents as to how much they were able to dump in the landfill. Then we will process their payment,” he said.

According to Cabarrubias, even if Jomara’s contract has ended, they continue to allow the city to use the transfer stations near Inayawan they contracted “out of goodwill.” And he said they will continue using them until instructed by Osmeña to stop.

Cabarrubias said they have ordered their trucks to stop dumping at the temporary transfer station at the SRP near the DPS office after this was cited by the Department of Environment and Natural Resources (DENR) as illegal since it was operating for more than 24 hours. But when asked by reporters where the garbage will be dumped until a new hauler is chosen, Osmeña said, “Back to the DPS in the SRP, I presume.”