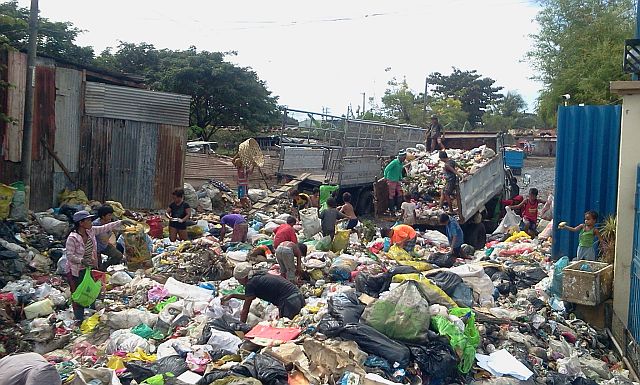 A road towards the interior portion of a garbage transfer station in Barangay Mactan was cleared of trash on Thursday after residents complained of the stench which had gotten some of their children sick. (CDN PHOTO/NORMAN MENDOZA)

Residents of Barangay Mactan, Lapu-Lapu City have complained against the foul smell of garbage emanating from a private lot used by the city to dump tons of trash.

But while residents of Sitio Dumpsite had been used to the smell of trash coming from the Maviche-owned dumpsite, the stench had become unbearable in recent months, since the city began to use a vacant lot owned by Maviche to also dump the city’s garbage there.

Maria Sardenilla, 55, a resident of Sitio Dumpsite for five years, told Cebu Daily News that things appear to have gotten out of hand as the garbage dumped in the private lot had gotten closer to her home.

The terrible stench, she said, caused many residents in the area, especially children, to be sick.

“Daghan na gyud ang nagkasakit dinhi sa among lugar ilabi na mga bata tungod aning dugay-dugay na nga kabaho sa basura nga duol nalang kayo diri sa among gipuy-an (Many had gotten sick here in our place especially the children because the foul smell has been here for quite some time and it is getting closer to our houses),” Sardenilla said.

Tagaan later told CDN that the problem arose from the difficulty encountered by the city’s garbage trucks in entering the dumpsite due to the very bad condition of the access road.

“We still had an area for dumping at the interior portion but the garbage along the way needs to be cleared and the access road needs to be stabilized,” said Tagaan.

Heavy equipment were sent to the area on Thursday to clear the road of litter.